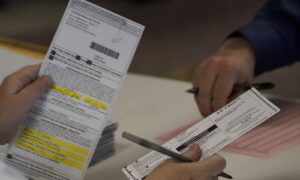 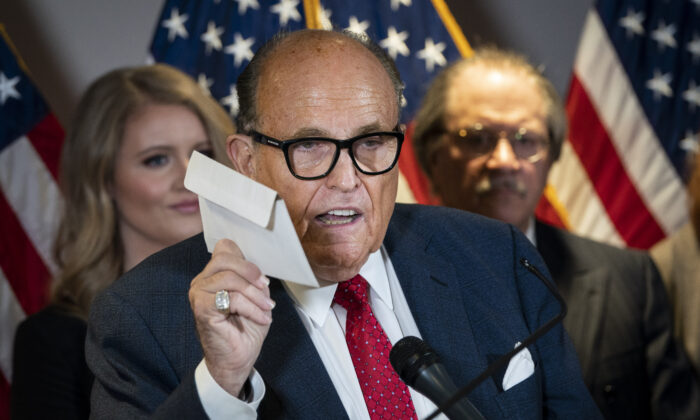 Rudy Giuliani holds up a mail-in ballot as he speaks to the press about various lawsuits related to the 2020 election, inside the Republican National Committee headquarters in Washington, on Nov. 19, 2020. (Drew Angerer/Getty Images)
Viewpoints

This Election Is Far From Over

Presently all Americans are divided into two camps: those who see nothing wrong with how the 2020 presidential election was conducted, and those who saw and continue to see major problems surrounding how votes were found, verified, and counted.

While many mainstream media outlets parrot Democratic Party talking points about how this was the most secure election in American history, alternative news sites continue to report on the numerous examples of federal and state election laws being violated.

Despite the corporate media’s best gaslighting attempts, more than half of the country is aware of the serious problems with the 2020 election as it was conducted in many of these Democrat-controlled states and big cities.

We’re all expected to believe that, in an election where the GOP picked up at least 12 seats in the House, retained control of Congress, and expanded the party’s control of state legislatures, the man in the top GOP spot on the ballot lost to Joe Biden.

It appears to me that while he gets things ready behind the scenes, President Donald Trump is making use of media-savvy allies to put certain narratives forward in the mainstream media.

So, it’s effective having your counter-narrative prominently displayed in the mainstream media even as that selfsame media is endlessly yelling at you to concede already and just go away.

Top lawyer Sidney Powell, former New York mayor Rudy Giuliani, and former Acting Director of National Intelligence Richard Grenell have each stated that when all the evidence is laid out, no one will be able to argue that massive federal election vote fraud did not occur in the 202o election.

When someone makes claims like this, you must look at their past track record on these kinds of statements.

Powell, Grenell, and Giuliani All Delivered in the Past

When Powell said she had explosive documents given to her under seal that would blow the Gen. Michael T. Flynn case wide open, she was not exaggerating. That is exactly what happened. The documents proved exactly what Powell claimed they would prove: that Gen. Flynn was the victim of a criminal conspiracy to frame him for a nonexistent crime.

When Giuliani made claims about the explosive contents of the abandoned Hunter Biden laptop, he, too, turned out to not be exaggerating. He said the laptop contents would shed light on allegations that the Biden family is corrupt and likely compromised by the CCP regime in Beijing. And from what we’ve seen from the laptop and from whistleblowers such as Tony Bobulinski, the former mayor of New York wasn’t embellishing the facts.

Grenell said when the public got to see the declassified transcripts of key Spygate figures, they would fully understand just how badly Democrats and corporate media had been misleading them about Russiagate. And that’s exactly what happened. When the transcripts were publicly released, everyone saw that at no time did the people spreading the Russiagate narrative say under oath that they had seen any evidence proving Trump/Russia collusion had occurred.

What Specific Election Fraud Claims Are Being Made?

What are Grenell, Powell, and Giuliani specifically claiming about election fraud in the 2020 election?

Grenell has said there are thousands of illegal ballots cast in Nevada that need to be tossed out. Ballots by dead people, and by people who don’t live in Nevada and who may have compounded their fraud by voting in another state.

Giuliani has claimed hundreds of thousands of ballots were counted in Philadelphia illegally, since GOP observers were prevented from watching, a violation of election law.

Powell has produced a signed affidavit from someone described as a high-ranking Venezuelan military official who was allegedly present and observed how the Smartmatic software was allegedly used to fix foreign elections in countries such as Venezuela and Argentina.

Given the track record of these three people, I think it’s highly likely they will back up what they are saying.

Grenell, Powell, and Giuliani aren’t launching a narrative about massive federal election fraud based on fake evidence. Far from it. The evidence is going to be quite real.

But their purpose isn’t to make the full case in the media in a public relations campaign. Election fraud won’t be proven in a media broadcast between different sides arguing about their different narratives.

It will be proven in the federal courtrooms. That will be the job of the U.S. attorneys that Attorney General William Barr already authorized to investigate the federal election fraud.

I don’t know exactly what will happen between now and Dec. 14, the date the Electoral College is scheduled to meet and vote. But what I do know is that the next several weeks certainly aren’t going to be boring.