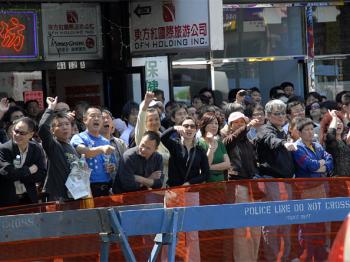 'They came over after they fought with Falun Gong and I shook hands with them one by one and thanked them.' -Chinese Consul General Keyu Peng (Epoch Times file photo)
US

Who’s Who in the Bicentennial Commemoration of President Lincoln

By Pamela Tsai
Print
PHILADELPHIA—Philadelphia is rich in the commemoration of the life and legacy of President Lincoln. His face, sculpture and words are found in many historical sites: Union League, Independence Hall, Thomas Jefferson University, and the University of Pennsylvania.

On July 2, a new statue was presented to the city of Philadelphia by Peng Keyu, the Chinese Communist Party’s (CCP) Consul General of New York. The unveiling ceremony was held in front of Independence Hall. Drawing several hundred people, the event was part of Philadelphia’s bicentennial commemoration of President Lincoln.

At the ceremony, many Philadelphians heard Peng’s high praise of President Lincoln’s legacy. Yet, few seem to know who Peng Keyu is.

In a telephone recording submitted to the Civil Rights Division of The U.S. Department of Justice on July 16, 2008, Peng admitted his involvement in mobilizing pro-CCP mobs to attack Falun Gong practitioners in Flushing, New York. The recording was made on May 22, 2008 by the World Organization to Investigate Persecution of Falun Gong (WOIPFG).

In a taped telephone conversation, Peng detailed his success at the undercover investigator’s request.

Peng: “They (Falun Gong) protested against the Chinese Communist Party. Well, I went there [the site in Flushing where the mob was harassing Falun Gong practitioners] the day before yesterday, and also three days ago, because we have to be very careful with this kind of thing. Otherwise, people will say the Chinese consulate is behind it, agitating people. Some of our men were among the crowd and they reported to me afterward. I am quite familiar with this. But we encouraged them secretly. Because I showed up at the scene, everyone was very excited.”

Peng: I would say I have kept a very good relationship with them … Showing up in person or not makes a lot of difference in terms of effect, so I pay them personal visits frequently. This way those overseas Chinese people [pro-CCP Chinese community people] would feel closer to me at heart. For example, in some occasions, they would come over after they have fought with Falun Gong [practitioners] and I would shake hands with them one by one and thank them. I say nice, encouraging words to them. This is what I must do.

"To tell you the truth, I must do it when the thing has been done to this point, yet I must not do things like that right in front of Falun Gong. I usually park my car far from the scene because I must avoid being seen by them [Falun Gong practitioners]. I must be really careful in this regard; otherwise, people will accuse me of this or that. This will give them [Falun Gong practitioners] leverage. That will not be good.

Peng also cited the Chinese language media as a tool used by the Consulate to manipulate public opinion in the Chinese community.

Peng: “I told the people from the CCTV [China Central Television, CCP’s mouthpiece] ‘You guys should take some footage of these phenomena.’ It is great indeed … I condemned Falun Gong. It is in the newspaper today. I read the news today. The China Press (Qiao Bao) made a very detailed report.”

CCTV enjoys great access in the U.S. market—it is on DirecTV Satellite channel 454, on Dish Network Satellite channel 582, Verizon FIOS channel 1750 and some US cable systems. Also, it can be watched streaming over the Internet directly from CCTV-4's website.

In a study report “How the Chinese Government is Attempting to Control Chinese Media in America”  The Jamestown Foundation, a Washington DC based think tank offered insights into the role of Chinese language media described by Peng Keyu.

According to its study, all four major Chinese newspapers in the U.S., the World Journal, Sing Tao Daily, Ming Pao, and The China Press are either directly or indirectly controlled or influenced by China.

While the CCP’s media has been gaining greater penetration in the US market, all major U.S. newspaper and TV stations are forbidden in China. Pro-democracy Chinese language media funded by the US government—Radio Free Asia and Voice of America (VOA) are blocked by the CCP.

Peng’s appearance in Philadelphia’s bicentennial commemoration of President Lincoln was found disturbing by many in the area’s Chinese community.

Michelle Yu of Greater Philadelphia Asian Culture Center said, “I was shocked to see him there. I wondered who/what brought him here—Pro-CCP Chinese or simply no knowledge of who Peng Keyu is?”

Angela Chao, spokesperson of the Philadelphia branch of Global Service Center for Quitting CCP, said, “If we stage a peaceful protest against CCP here in Philadelphia, what would Mr. Peng do to us?”

According to New York attorney Robert Gottlieb, the tape recording of Peng’s conversation is “a vicious signal by a foreign national of conspiring with other individuals to gather together to incite them to go out to beat people up merely for expressing their beliefs.” Attorney Gottlieb said Peng could be expelled from the US if found guilty of mobilizing attacks against Falun Gong. “Immunity, nevertheless, does not give foreign nationals the right, the power, the protection against conspiring with individuals, to violate the civil rights of people here in the United States as this individual, the consul general, clearly has done,” said Gottlieb.

Dr. Wenyi Wang is a Flushing resident who joined a collective complaint filed with the Civil Rights Division of US Department of Justice. She said she received a phone call in July 2008 from the Justice Department informing her that an investigation of Peng had started.

Similar cases have occurred in the U.S. and Canada. Diplomats were found to have violated criminal laws and subsequently were expelled from the country. In November 2004, Foreign Affairs Canada confirmed that Pan Xinchun left Canada after failing to satisfy the judgment against him. The former Chinese Vice-Consul General of Toronto was found liable in a Canadian court for defaming Falun Gong.

Michelle Yu of Greater Philadelphia Asian Culture Center said, “We don’t want to see Peng Keyu being received as a dignitary in Philadelphia 'til Justice Department concludes the investigation and proves him innocent.”

According to a historian’s study, President Lincoln’s ideal “The government of the people, by the people and for the people” inspired Dr. Sun Yat-sen (1866–1925) to found The Republic of China (ROC) in 1912, the first democratic society in Asia.

Dr. Sun was the first provisional president of ROC and is regarded as the “Father of the Nation” by Chinese people. Sun’s richest legacy is known as “The Three Principles of The People.” They are the People's Relation, The People's Power, and the People's Livelihood. In a public speech delivered on December 7, 1921, Sun stated “Three Principles of The People are consistent with American President Lincoln’s ideal of "The government of the people, by the people and for the people.”

The government of the Republic of China was overthrown and officially replaced by the Chinese Communist Government in 1949.