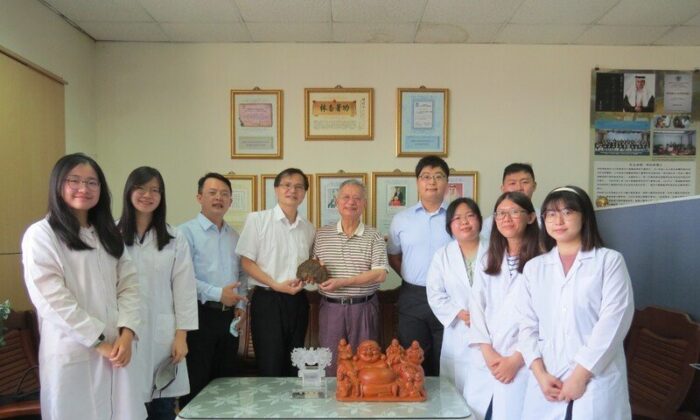 A research team led by Jaung-Geng Lin, fellow of the Academia Sinica in Taiwan, found that the Phellinus linteus used in TCM can prevent COVID-19. (Courtesy of China Medical University)
Hong Kong

A research team led by Jaung-Geng Lin, a fellow of the Academia Sinica in Taiwan, found that the ingredients of the Traditional Chinese Medicine (TCM) Phellinus linteus, a fungus, can effectively prevent the CCP virus (SARS-CoV-2) from entering cells and reduce the risk of infection. The research report has been published in Biomedicine & Pharmacotherapy.

The CCP virus infects human cells by combining with ACE2 on the cell membrane, and TMPRSS2, another protein, can accelerate the entry of the virus into cells.

The study found that the hispidin and 3,4-dihydroxy benzal acetone, components in Phellinus linteus, can inhibit cell production of ACE2 and TMPRSS2, thereby preventing the virus from infecting cells.

Moreover, Phellinus linteus has no cytotoxicity and will not damage organs.

Guan-Jhong Huang, a professor at China Medical University in Taiwan, who participated in the study, said that the current data is only limited to evidence from cell and animal tests, and clinical studies are being planned.

The research team suggested that during the pandemic, people can take a total of 1 to 2 grams of the Phellinus linteus extract every day as a daily supplement to enhance their immunity.

Wei-lun Tsou, another Chinese medicine practitioner at Jinghua Clinic in Taiwan, who participated in the study, told the media that in addition to preventing the infection, Phellinus linteus can also reduce symptoms such as fever, fatigue, and respiratory tract after-infection.

Tsou recommended a diet remedy to prevent infection, using 20 grams of Phellinus linteus, 20 grams of Astragalus, 10 grams of Lycium barbarum, and 5 jujubes to make tea. To make it effective, drink for at least 3 weeks.

Li Ke, a registered Chinese medicine practitioner in Hong Kong, spoke to the Epoch Times that Phellinus linteus is a fungus that parasitizes mulberry trees.

In the existing TCM literature, it can be found as ‘Sang Er’ in the Classic of the Materia Medica, which was written 2,000 years ago.

Li Shizhen, one of the well-known ancient TCM practitioners, recorded in the Compendium of Materia Medica, known as the Great Pharmacopeia in TCM, in the Ming dynasty that Phellinus linteus is cold in nature, slightly bitter in taste, can benefit the five internal organs, disperse intestinal qi (vital energy), detoxify, stop bleeding and so on.

It was a common diuretic, stomachic and antidiarrheal medicine in TCM.

In 1968, the National Cancer Center of Japan confirmed that Phellinus linteus has an antitumor effect.

In 2006, the British Journal of Cancer published a study by Boston University, which found that with the extract of Phellinus linteus combined with chemotherapy, the number of apoptotic in cancer patients was more than that in the control group. And Phellinus linteus extracts do not contain toxicity to normal cells.