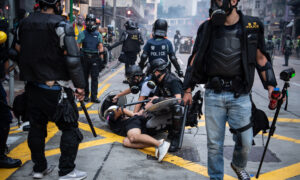 A joint production of ‘Zooming In,’ an in-depth news program on NTD, and The Epoch Times

The world has been on edge these past few days as Hong Kong experienced its bloodiest week since the protests began in June. Many signs are suggesting that the Chinese Communist Party leadership is becoming impatient and may want to put an end to the movement not in months or weeks but in days. Will Hong Kong really become a second Tiananmen Square? Can America help prevent this from happening?

November 12 was a dark day for Hong Kong. The prestigious Chinese University of Hong Kong (CUHK), among other places, were turned into war zones.

Students fought back by throwing rocks and petrol bombs while taking shelter behind barricades they had built using bricks dug up from roads.

Residents from nearby neighborhoods stormed in to fight alongside students. The campus was burning.

On Nov. 17, the battleground moved to Polytechnic University. Police dispatched two armored vehicles and rushed to the student defense line. Students threw petrol bombs and forced the vehicles to retreat. The surrounding area of the university was blocked by riot police afterwards.

A few days ago in a speech in Brazil, Chinese leader Xi Jinping described the protesters as “radically engaged in violent crimes,” and suggested that a solution to the protests would be, “steadily supporting Hong Kong police in law enforcement while firmly endorsing Hong Kong’s judicial system in the punishment of violent criminals.” He said stopping the protests is Hong Kong’s “most urgent task.”

And on Nov. 16, Chinese People’s Liberation Army soldiers from the barracks near Polytechnic University were seen clearing streets of bricks, metal bars, and other debris left by demonstrators.

Wei Jingsheng was one of the earliest pro-democracy activists in China. He spent 18 years in prison for so-called “counter-revolutionary” activities beginning 1979. He was imprisoned for over a decade for his writings on democracy.

Simone Gao: What do you think is the reason behind the recent escalation of police violence in Hong Kong? What does Chinese leader Xi want to do?

Wei Jingsheng: The situation of Hong Kong is similar to the June 4 [Tiananmen Square] incident. Very similar. The Hong Kong masses are so determined that they will fight back even if the People’s Liberation Army goes into Hong Kong. They are very determined. They will not back down.  As for the Chinese Communist Party (CCP), the hardliners have the upper hand. Look at the fourth plenary meeting of the CCP. [In general,] no consensus was reached. The only agreement was: Double down the crackdown on Hong Kong. Personally, I feel that the cause of this unfavorable situation lies with the international community. Just as in the June 4th incident the attitude of the international community is an important element. And the American government? Originally, its attitude was good. The Sino-U.S. trade talks were coupled with the humane treatment of the crisis in Hong Kong. However, currently, we find worrying signs in this position. For example, the U.S. government condemned the violence in Hong Kong. But the condemnation was not limited to only the violence from the Hong Kong government and the Hong Kong police. It was a condemnation of violence on both sides [protesters and police]. Superficially, it seems very fair. But in fact it is not. Why? Let me quote Mr. Chang Ping with the Voice of Germany. He said: “Do not blame the oppressed.” This is very much to the point. They are suffering. Hong Kong protesters are violently beaten, even killed. They are suffering. How can you blame them for their self-defense?  So the U.S. approach—condemning both sides—seems to send a wrong message to the communist regime and party chief Xi Jinping.

[During the 1989 pro-democracy protests in China,] the hardliners in the CCP wanted a bloody crackdown. But among Party leadership, many were against it, which put huge pressure on [then-Party leader] Deng Xiaoping. Moreover, Deng was hesitant to order his troops who were stationed in the suburbs to march into downtown Beijing. One of his main concerns was the attitude of the U.S. He had to consider the consequences. If he were to stage a crackdown by force and incur worldwide sanctions, that would be a huge blow to China’s economy. If he used force to crack down on the movement, and this resulted in a declining economy, power would still be lost. So, Deng began to hesitate. Just at that moment, U.S. President Bush senior did a very bad thing. He sent the wrong message to Deng, twice, which ultimately led to Deng’s decision to use lethal force. In the first instance, he stated: “We won’t interfere with China’s internal affairs.” Even with this, Deng was unable to make his decision. Then Bush removed the U.S. Ambassador to China, Winston Lord, who was supportive of the pro-democracy activists and whose wife was Chinese and also a supporter of the pro-democracy movement. President Bush removed him from his post. The newly appointed ambassador to China was unable to immediately carry out his obligations. At that moment, Deng was clear about the U.S. intention.  He then felt reassured and gave the order to use lethal force.

Gao: Then, how does Xi Jinping feel about the current situation your opinion?

Wei: He may feel that if the United States does not show much determination, if he gives Trump a kind of sweetener in trade negotiations, then Trump may not care much about Hong Kong. [Xi would then think] “I can do whatever I like there.” Similar to the CCP during the June 4, 1989 Incident. Or, “I’ll simply resort to street killing until you are all too scared to come forward.” They are accustomed to that way of thinking. The CCP believes in violent crackdowns, which in their eyes, can solve everything. So I feel that the attitude of the United States and the West in general is crucial. Now the U.S. has taken the lead in saying: “We condemn violence on both sides.” And Europe followed suit. That means Xi feels less pressure on his shoulders. He may think: “Now I can focus my attention on tackling the Hong Kong issue,” which is a dilemma that he and those corrupt officials are facing. In fact Xi is also troubled by the trade war, a declining Chinese economy, and resistance from within China. If there is a successful crackdown on the Hong Kong protests, then at least one of his headaches is gone. Therefore, Xi may think that it’s time to launch an armed suppression.

Gao: So, you think Hong Kong is likely to encounter a situation as in the June 4 Incident?

Wei: Yes. If the international community shows weakness and sends the wrong signal to the CCP, that will certainly happen. Xi will definitely send troops to suppress protesters, because he has no other choice. Currently people are advising him to negotiate with the Hong Kong protesters for a way out. In fact it’s very easy. You just carry out the Sino-British Joint Declaration, which states everything clearly. You just follow the Declaration and this problem will be solved. Hong Kong is not demanding too much from him. Just stick to the declaration, nothing else. They [protesters] never said they want independence. Only an extremely small number of people seek independence, the overwhelming majority do not. But if he doesn’t seek a political solution, the only option left is military suppression.

Gao: What about the U.S. bill, the Hong Kong Human Rights and Democracy Act? Will it serve as pressure to the Chinese regime?

Wei: If that bill gets approved and gets a signature from the White House it will become U.S. law. It then must be implemented. The CCP and Xi will weigh the matter. If they really use violent force, Hongkongers won’t retreat. Even if they send out troops, they still won’t give in, same as the Beijing people [in 1989]. A fierce resistance will occur. Then real sanctions would follow and they would probably not be limited to Hong Kong. Of course, Hong Kong will be the first. The favorable treatment Hong Kong enjoys as an economy would be gone. China would face overall sanctions, economically and politically. Just like after the June 4 Incident. Before the Tiananmen Square Massacre, people didn’t pay much attention to it. After all, they were foreigners. Chinese affairs were not among their immediate concerns. However, after the scenes [from Tiananmen Square] went public, people’s reaction were very strong. Government reactions were also strong. So the latter had to make a gesture of sanctions against China. Then they quietly sent word to Deng and reassured him that those moves were false. Even so, the Chinese economy was substantially affected. If that situation were to really occur, to put it simply, the CCP would collapse more quickly.

Gao: Meanwhile, the U.S. and China are near signing a phase one trade deal, although the thorny issue of whether to roll back tariffs is still being debated. Will Hong Kong get in the way of a trade deal? How is today’s U.S.- China relationship different from 30 years ago?

Wei: The current historical background is very similar to that from before, but not exactly the same. President Bush had thought that Deng could create opportunities for American businesses to make money, because Deng opened up China’s economy, and the U.S. entered China and began profiting. Their lobbying power was surprising. At the very beginning, before the Massacre, ordinary American people didn’t pay much attention to Chinese affairs.

Currently, however, we are facing a different situation. Ordinary American people, Congress members, and statesmen have all noticed the cruel repression in Hong Kong. They are indignant and can’t tolerate it. Every senator or representative would be afraid to publicly announce that he or she does not support the people of Hong Kong. No one would dare to say this. The domestic morale is different from before. From the perspective of President Trump, he is unlike Bush senior, who just wanted to get gain benefits: “we have no responsibility anyway, those are your internal affairs.”  But the challenge is that Trump is fighting against China right now. You can no longer cite the excuse that we do not interfere in China’s internal affairs. To say so, everyone will feel that you are betraying the people of Hong Kong. And your opponents will take this to bite you vehemently during next year’s election, right? Let alone that the Democratic majority in the House of Representatives are the firmest supporters of the Hong Kong protesters. Are you sure Democrats won’t attack [Trump] with this next year? Definitely they will. As I analyzed in an article a few days ago, you will lose your leadership in the world if you fail on the issue of Hong Kong—the frontline of democracy, fighting authoritarianism. No one will trust you anymore and huge blame will be upon you. Moreover, in China, after he [Trump] gets over this huge challenge and has stabilized the domestic situation, will Xi obey the deal he reached with you? He won’t. The CCP will never go to the negotiating table unless they are weakened significantly. If they face no challenge at all, why would they feel the need to obey your agreement? Just as in May, they backed out. So if he [Xi] tears up next year’s so-called “first-stage agreement” that he agrees to sign with you, you’ll feel it even more awkward trying to explain it to American voters.