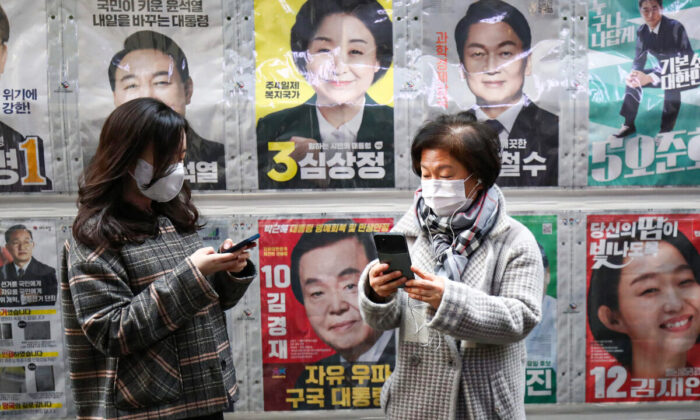 South Korea's presidential candidate Lee Jae-myung of the ruling Democratic Party poses for a photo before a televised debate for the upcoming March 9 presidential election at KBS studio in Seoul on March 2, 2022. (JUNG YEON-JE/POOL/AFP via Getty Images)
International Relations

The presidential election set to take place in South Korea on March 9 is of critical importance to the future of the nation as the Chinese Communist Party (CCP) seeks to extend its influence further over both North and South Korea.

That’s according to Arthur Lee, who defected from North Korea when he was 29, and who spoke to EpochTV’s “China Insider” program at the Conservative Political Action Conference in Orlando, Florida, on Feb. 27.

“I think this upcoming election is very important, because we’re kind of at a crossroads, where we are either going to be a free nation or become a one-party dictatorship,” Lee said.

In South Korea’s widely anticipated election, the eighth since the country officially adopted democracy, the leading candidates are Lee Jae-myung of the ruling Democratic Party, Yoon Suk-yeol of the People Power Party, and Sim Sang-jung of the Justice Party. The current president, Moon-Jae in, is ineligible under South Korea’s constitution to seek another term.

Yoon Suk-yeol and Lee Jae-myung are widely seen as the front-runners in an extremely tight and closely watched race, and they bring markedly different foreign policy and diplomatic agendas to the table. Yoon, the People Power Party candidate, is seen as hawkish on China and North Korea, while Democratic Party candidate Lee is viewed as favoring cooperation.

In Arthur Lee’s view, the Democratic Party candidate’s stance goes much further and emphasizes assisting and appeasing Beijing as the regime of Xi Jinping seeks to insinuate its power and influence ever further throughout both Koreas.

The connections between Beijing and Pyongyang are already so strong that the wave of executions undertaken by North Korean leader Kim-Jong Un beginning in 2013 had repercussions for people in China, where Lee’s father worked as an economic official and his sister attended a university.

“My sister was studying in China. Her roommate was arrested right in front of her, and she was sent to a prison camp right away,” Lee said.

Lee views the two communist nations as having a mutually supportive relationship, though China is by far the more powerful partner.

“When we look at what’s happening now, China is supporting what North Korea is doing, whether that’s launching missiles into the nearby ocean or threatening nuclear aggression,” Lee said.

“What do you think is the real threat for South Korea? This China-North Korea alliance is military and economic. It’s the real big issue we’re looking at,” he added.

Lee said that Chinese communist ideology has already spread far throughout South Korea, as evidenced by the fact that the country is home to 22 Confucius Institutes, more than any other nation. These Beijing-funded institutes, while ostensibly a Chinese language and culture center, have provoked growing alarm internationally over their role in transmitting CCP propaganda and suppressing academic freedom.

These issues should be of grave concern for South Koreans who head to the polls next week, according to Lee.

“Culturally, they are already infected by the CCP regime, and there are also officials in South Korea with [ties] to Chinese money. So I think that many in South Korea, especially politicians, are reluctant to criticize China. Economically, militarily, and culturally, China is attacking South Korea,” he said.

In Lee’s view, CCP officials also want to drive a wedge between South Korea and Japan, because they fear that if people in China continue to see two prosperous, democratic, capitalist nations so close to their own borders, it could set an example for them.

“South Korean and Japan are free countries, and their freedom can impact Chinese people. So [CCP officials] don’t want freedom near the border. That’s why China helps North Korea to provoke South Korea and the United States.”

North Korea’s missile development depends heavily on Chinese assistance. In its missile launches, North Korea, which is unable to produce adequate supplies of solid fuel on its own, makes use of imports from China, according to Lee.

“We know that, but nobody wants to talk about it,” he said. “North Korean companies are using Chinese banks, and there are no restrictions.”

Lee warned voters and young people in particular not to entertain any belief in socialism or communism as a system.

“The end goal is to have total control of the people. You have to fight for your freedom, or your freedom will be eliminated by these totalitarian regimes,” he said.