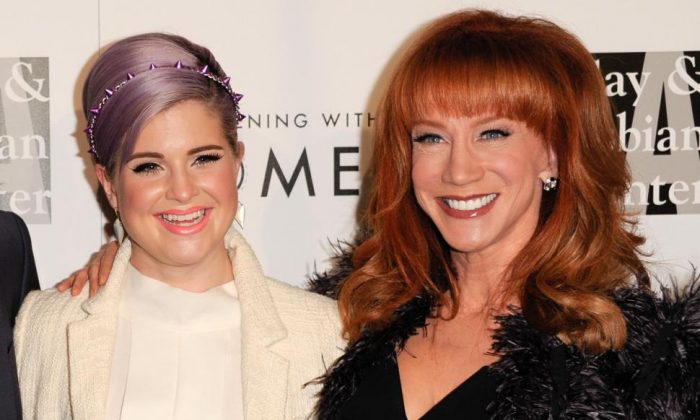 Attached to the tweet was a photo of the two women tonguing each other (more information than I personally need to see). The 30 year-old Osborne Tweeted:

“I could not be more proud of you @kathygriffin you have my love and support always,”

OSBOURNE AND GRIFFIN: More intimacy than I personally need to see

Not long after another tweet of support came from “Girls” actress Lena Dunham who tweeted:

“Congrats to my beautiful friend Kathy Griffin for bravely saying enough is enough to intolerance of all kinds on television.”

Griffin, who arrived at “The Fashion Police” as a replacement for the late comedienne Joan Rivers, served only seven days after her debut with no regrets.  She released the following statement yesterday via social media:

“I am a freedom-loving female and gay rights activist who loves to find the funny in all people, attitudes, beliefs, and appearances, but only when the context permits intelligent humor,” Griffin stressed.

“I thought I could bring my brand of humor to ‘Fashion Police’ so that beautiful people in beautiful dresses could be teased when appropriate. My brand of humor, while unrepentant and unafraid, is all about CONTEXT,” adding she is “no saint” but doesn’t want to use her comedy to “contribute to a culture of unattainable perfectionism and intolerance towards difference.”

Osbourne also quit the show only a mere few days after Guilianna Rancic’s controversial and bigoted remark about Disney starlet Zendaya Coleman and the natural dreadlock hair style that she donned at the Oscars.  Rancic noted that Coleman looked like she smelled of “patchouli and weed.”

Griffin is set to be replaced by Joan Rivers’ daughter Melissa. Wondering who’s next at E!’s Fashion Police.