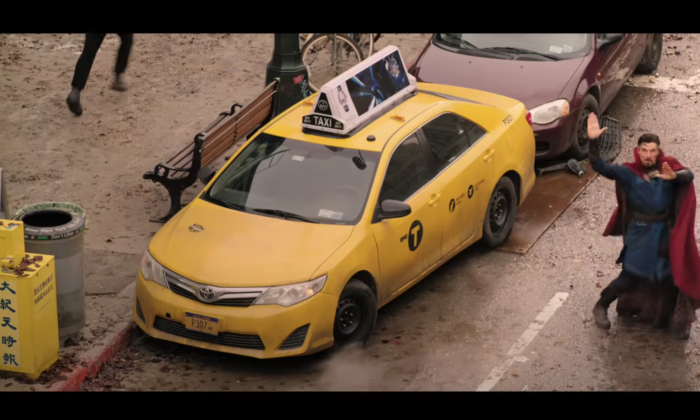 A scene in the movie "Doctor Strange in the Multiverse of Madness" features a yellow newspaper box with the Chinese characters for The Epoch Times. (Screenshot/IMDb/YouTube)
US News

China’s ruling communist regime likely isn’t going to allow Marvel’s new movie, “Doctor Strange in the Multiverse of Madness,” to open in China’s theaters, after an Epoch Times newspaper box made a brief appearance in a clip from the movie, according to a long-time Hollywood executive and film producer.

Chris Fenton, author of “Feeding the Dragon: Inside the Trillion Dollar Dilemma Facing Hollywood, the NBA, and American Business,” said it was already “a bit of a long shot” for the new “Doctor Strange” movie to be released in China after several Marvel movies didn’t get into the Chinese market.

“This recent development of The Epoch Times being seen as one of the major stars in the movie, is definitely throwing a wrench in any sort of shot that they did have of getting into that market,” Fenton said in a recent interview with EpochTV’s “China Insider” program.

The yellow newspaper box, bearing the Chinese characters 大紀元時報 for the Chinese-language edition of The Epoch Times, appears for a few seconds in a clip from the movie. It sits in the background during a battle between Doctor Strange and a one-eyed monster named Gargantos on the streets of New York.

Seems like #DrStrange won’t be showing in China. Why? Because of alleged LGBT dialogue and a newspaper box of @dajiyuan the Chinese lanaguage Epoch Times appearing in the shot. Absolutely hilarious time for the world to see the ridiculous censorship from China pic.twitter.com/4DdcK6mLnh

The Epoch Times is known for its uncensored coverage of current affairs in China, including political infighting within the Chinese Communist Party (CCP), the regime’s human rights violations against ethnic minorities and religious groups, and Beijing’s propaganda and influence operations abroad. It was founded by Falun Gong practitioners who were facing persecution in China for their faith that teaches people to live according to the principles of truthfulness, compassion, and tolerance. The Chinese-language edition is the largest-circulating newspaper among overseas Chinese communities.

Like many Western media outlets and social media platforms, the English- and Chinese-language websites of The Epoch Times are banned in China.

The chance of the new movie being shown in China is “probably now nonexistent,” Fenton said, but people will not know why since “China never [lets] you know for sure why they’re banning any particular movie.” He said Beijing has a habit of being ambiguous, and not just in banning movies.

“The Chinese government never fully tells you why they’re penalizing a company. In fact, a lot of it is speculation. And quite frankly, that speculation creates a wider net of self-censorship because you’re never sure exactly what they’re mad at,” he said.

The bigger question is whether Marvel Studios was intentional in including the newspaper box in the scene. To that, Fenton said he could only speculate, but it was unlikely Marvel didn’t know it was there.

He said his firsthand experience with the “Iron Man 3” movie taught him that the script supervisors and people working on the movie’s post-production “know exactly what props are used.”

The movie is currently scheduled to premiere in the United States on May 6. However, it remains to be seen whether the movie still has the newspaper box in the battle scene. There’s a chance Marvel could remove it, considering that China’s hawkish state-run media Global Times has openly criticized Marvel in an opinion article.

The article by the regime’s mouthpiece, published on May 1, went to great lengths to slander The Epoch Times before accusing the new Doctor Strange movie of “shaming U.S. and Hollywood” for having included the newspaper box.

“So in the case of China actually being provoked in a way where Marvel feels like they have to remove something for the rest of the world to see, I think they’ll say no to that,” Fenton said.

“And whether China actually asks them to do that, or whether they just assume that ask is there and they don’t do that, I don’t know. But I’d like to believe Marvel does not remove it for the world to see.”

The Epoch Times has reached out to Disney, Marvel’s parent company, for comment.

“The problem with China is that we’ve been censoring ourselves with the content we make for the globe, in order to get access to that one market,” he said. “So when we’re doing that, we’re essentially placating China to take their narrative not just inside of their borders, but to spread it around the world.”

The producers of “Red Dawn” decided to depict villains invading the United States as North Korean rather than Chinese for fear of losing the Chinese market.

A 2019 trailer of “Top Gun: Maverick,” a movie scheduled to be released in the United States on May 27, shows that Taiwan’s flag was removed from the patch on the leather jacket worn by Tom Cruise’s character, naval aviator Pete “Maverick” Mitchell. China considers Taiwan as a part of its territory and rejects any hint that might suggest the island’s de facto independence.

First, the regulators asked that the Statue of Liberty be removed at the film’s ending. After Sony refused, the regulators requested that the statue be minimized, such as dimming the lighting on the sculpture. According to Puck News, Sony also turned down the second request.

“Spider-Man: No Way Home” was released in the United States in December 2021, but it hasn’t been released in China.

“So what I’d like to see Hollywood do is simply protect freedom of speech and freedom of creative expression,” Fenton said.

“We should be making movies that cater to audiences around the world. But we should be doing it protecting the rights of the filmmakers themselves to be able to tell the stories completely unfettered by any sort of censorship, or by any sort of influence of propaganda objectives by China.”