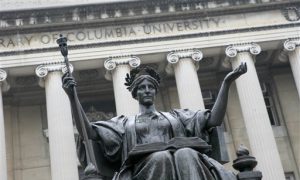 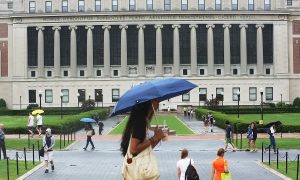 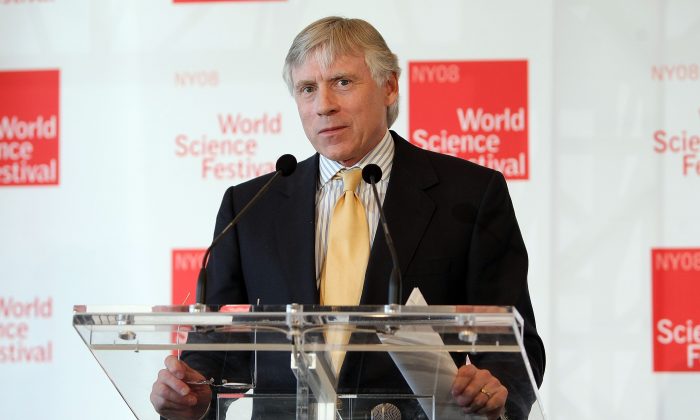 Lee Bollinger, President of Columbia University opened up a new discussion about a century-old American value at the National Constitution Center in Philadelphia. The venue couldn’t be more appropriate for the theme. Bollinger is one of the nation’s foremost experts on the First Amendment.

Hundreds of Columbia alumni attended the event and lined up for Bollinger to sign his new book “Uninhibited, Robust, and Wide-Pen: A Free Press for A New Century.”

A lawyer and scholar, Bollinger is known for his thoughts on the First Amendment and freedom of speech. In the 45-minute discussion moderated by Bill Marimow, editor of the Philadelphia Inquirer, Bollinger shared his personal involvement with the press at young age. He worked as a janitor in his father’s newspaper. He gave his professional views on the challenges faced by the press in the 20th century.

Bollinger expressed concerns about the contraction in news coverage, from local school board meetings to what’s going on in China. As a university president who constantlytriestoelevatescholarlywork and institutional research to a global platform, Bollinger was particularly worried about the contraction in foreign news. According to Bollinger, the Miami Herald, which used to have 14 bureaus in South America, closed the last one last fall. In Afghanistan, only the New York Times and the Washington Post had full-time journalists on the ground.

“We are risking becoming more provincial, isolated, and less and less able to determine our fate through the use of knowledge and information,” he said and gave China as an example.

“There are two dozen or 34 American media that’s covering China. This is a major problem for us. Because the world is becoming increasingly integrated economically. We owe China several trillion dollars. We are in a vast experiment with a government and society that’s making unbelievable strides in terms of economic development. And very serious questions about the legitimacy of the communist regime that runs this are open to both that society but also relevant to us.”

According to Bollinger, government censorship in one country is a threat to the freedom of speech elsewhere. “It was no longer just a human rights issue (for citizens of other countries) but a practical problem of our own needs of information.”

The 2003 SARS coverup in China was an example. Jiang Yanyong, a 76-year-old Chinese military surgeon broke the Chinese regime’s censorship on the news about SARS. Jiang was put under house arrest for causing officials to admit the SARS epidemic to the international community. Dr. Jiang was named “Person of the Year” by Times magazine.

Bollinger said when freedom of speech and press is suppressed in a country, listening to what the people have to say is very important, “We must hear what they say, because it is important for us to know what’s going on. For example food safety in China is immensely important because of the food that we now import, and toys, and product safety.”

Freedom of speech is no longer just a human rights thing that the United States wants to help Chinese people get. It is America’s “right to know” as well.

Bollinger said, “Censorship anywhere can become censorship everywhere. You may be vulnerable to the censorship laws elsewhere in the world even though you are doing it from the United States. The very technology that enhances your ability to communicate also makes you more vulnerable.”

“That is to me a primary impetus to saying we really need to now develop a global First Amendment. It must be the agenda for this century because now speech in the United States itself will be chilled by laws in the world,” he said.

On Google’s recent development with China, Bollinger said, “I have the sense that the lines have been drawn in the sand and Google is withdrawing to Hong Kong and maybe beyond. … What’s going to happen is exactly what is up for grabs. This is where we really need to get serious about this.”

He said the importance of making the First Amendment a global agenda is “a better way to live than one that a world that really constricts information flows. I don’t know how it will come out, that’s precisely why I think we need to engage with this in a major way, much more so than we are doing at the current time.”

Bollinger encouraged leveraging the economic/trade mechanism to promote global freedom of ideas and information. “We’ve been very good at building over the last couple of decades a global system of trade in goods and services. Now we need to develop a better global free trade in ideas and information. We can use the mechanism of trade, the WTO in particular, as a lever to try to get great freedom in the market place of ideas and info as well as the marketplace of goods and services.”

Speaking of China, Bollinger said, “You can’t have a society that’s growing in its capacity for education, knowledge, IQ generally, and then say, ‘I am sorry these things are non-discussable.’ It just can’t work that way. You will have to engage, and you are going to have to say, ‘I may change my mind.’ Because if you don’t say that, at some point, there is no future course. The biggest hope we have for China is that its leaders at least know that’s so.”

Bollinger told the Epoch Times that he has been to China many times. Asked if any of Columbia’s China programs involved partner- ships with Chinese government, he said the university programs are independent.