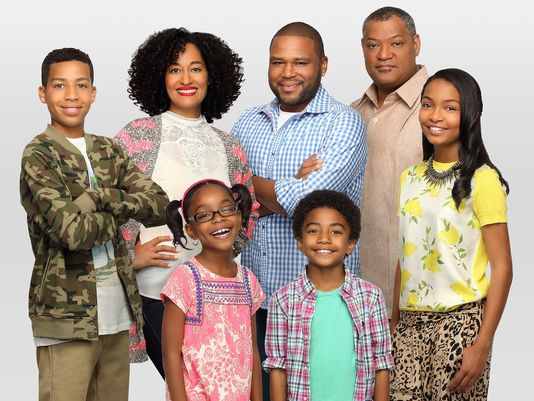 The IMDB storyline of the new ABC Sitcom Blackish (presumably provided by the network)  is described as follows:  “A family man struggles to gain a sense of cultural identity while raising his kids in a predominantly White, upper-middle class neighborhood.”

While this abbreviated synopsis is most certainly reflective of a valid real-life dynamic amongst upper-middle class Blacks, the blatant buffoonish rendering of this sobering dynamic in a weekly 30 minute sitcom misdirects, diminishes, and trivializes the immeasurable scope of Black existence in America.  I am left so mortified and offended by the trivialization and caricatured rendering of this real-life dynamic, that in reality I can only brush the surface of its inappropriateness in a mere blog.

There are so many levels of Blackish to be picked-apart as offensive and absurd, that I am at somewhat at a loss of where to begin.  But let us first reveal the parties responsible for delivering this offensive “programming” to the masses.

Blackish is an ABC production written by Kenya Barris (Are We There Yet,  The Game), and executive produced by a host of eleven industry professionals including the two co-stars of Blackish, Laurence Fishburne and Anthony Anderson.   Let’s summarize here.  This inept television production comes to viewers via eleven (eleven!) executive producers and one writer.  When a network is throwing all of that money into one mere situation comedy – it might behoove them to at least invest more efforts into the penning of such a creative venture. I’m a tad taken aback that Mr. Barris could pen this sitcom, and even more taken aback that the likes of Laurence Fishburne could sit behind the scenes and validate it.

Blackish abounds with unlettered and offensive one-liners, and scenario’s that rear-up from the shows opening to the is-it-over-yet finale. Even before the sitcom aired I was left perplexed over of the connotation of the mere title of the show… Blackish?  While I’m not dim-witted, I didn’t want to jump to conclusions.  Were they putting a new spin on terminology?  Because “Blackish” via my own personal comprehension, meant: not quite “Black” –  but “Black-ish”  –  which would mean somewhat Black, or “Black-like”… but again… not quite “Black.”

If this was indeed how the title was to be defined, the first question that reared-up in my spirit was how is ABC going to render what “Black” is – if someone can be deemed and diminished (or even perhaps elevated) as “Black-ISH?”   So without having even seen the show, I immediately foresaw  the slippery slope ABC was about to embark upon with respect to attempting to provide the masses with a limited rendering of what Black identity is as opposed to being “Black-ish.” Hence, the actual dynamic to be examined is not at all about the terminology of being “Black-ish”.. but about how the network allows this particular sitcom to define Blackness / Black identity, which cannot (and should not) be trivialized in a 3o minute network sitcom.  And this theme will play out on a weekly basis??? A monumental blunder for ABC.

Black-ish is a poorly-conceived sitcom about the Johnson Family.  There is the father Dre (Anthony Anderson), his father “Pops” (Laurence Fishburne – who only appears in the first episode), Dre’s wife “Rainbow” – who is a surgeon, and also half-white (portrayed by Tracee Ellis Ross – the half white daughter of legendary singer-actress Diana Ross), and four very charming children; Zoey (Yara Shahidi), Andre Junior (Marcus Scribner), and their two younger children  Jack (Miles Brown), and Diane (Marsai Martin).

I’ll try spare long winded paragraphical outlines of each and every stereotypical infraction dispatched by this production – but some of the infractions below just beg for a tongue-lashing:

Dialogue: Dre  Johnson describes his wife as a “pigment challenged” mulatto woman and questions her Blackness.  Are you kidding me!? The remark is insulting, and utterly condescends to Black viewers. Pigment challenged (light-skinned) must have been pretty darn appealing to this character because he chose to make this pigmently challenged woman his wife and mother of his children.  The highest compliment a man can pay a woman. Not to mention (and yes, I’m going to go here)… young black children are not savvy enough to analyze dialogue or the bigger picture of what their minds are consuming.  What they process is merely what is visually and audibly evident.  The image that the young impressionable black male sees (since this is indeed an upper middle class Black family) is that success means a light-skinned Black-woman. After all, this is what many (not all) of his sports heroes and entertainment favorites have done. They’ve taken White females or  light-skinned / mixed race Black women as wives.  This is what small Black children see.  The males see it and subconsciously adopt it, as well as young female children. They process it and deem themselves unworthy of attracting a successful Black man sans altering her appearance.  Her self-worth becomes diminished.  So should Black viewers have been amused by the intercultural racial dig that this man takes at the woman in his life and fail to notice the bigger picture that…  her pigment challenge must have been appealing to him???   Moreover, if anyone’s “Blackness” would be in question it would have to be the person who chose the half-black spouse.. not the half-black spouse.

Dialogue: Rainbow (.. and give me a break with the name) Johnson responds to her husband that all anyone needs to do is look at her hair and her backside to see that she is Black.  Again, Kenya Barris, ABC, and Laurence Fishburne have got to be kidding me!  Blackness has been reduced to kinky hair and the size of a person’s backside???

Dialogue: Dre calls a White colleague an “honorary brother”, but it seems to be narrowly based on the slang language that the young man seems to naturally speak.  Hence his language made him an honorary Black (not any particular empathetic affiliation or association with the Black community) – which erroneously implies that this type of speech can be associated with all Blacks.

Scenario: Dre’s older children are not aware that Obama is the first Black president.  Kenya Barris… are we really to believe this???   And if so, Dre’s preoccupation with the Blackness (or lack thereof) of his family should be focused back upon self.  I cannot imagine that Black children of any socio-economic background would not know that Obama is the first ever Black president of the United States.  If they do exist their parents need to be slapped and their schools closed for re-examination of curricular practices.  Now maybe this Obama dialogue was supposed to be funny via exaggeration.  If so…. it wasn’t.  It was simply grating.

Scenario: A Jewish friend of Andre Jr. comes over to the Johnson home for grape soda because his Jewish family doesn’t keep that kind of product in their home. Andre Jr. wants to have a Jewish Bar Mitzvah for himself.  Again.  If Dre is concerned about his son’s (who is a teen) lack of cultural pride – he need first and foremost look at the man in the mirror.  Why have so many years gone by in the upper middle class environment of the Johnson household without cultural nurturing – or whatever Dre perceived to be cultural nurturing?  This production is blatantly misguided and rambling all over the place with degrading stereotypes that simply aren’t funny.

Dialogue:  An insulted Dre utters the question ” What FRIED fried chicken is too Black you!?” when the family sits down to a meal of oven fried chicken. Blacks and “Fried Chicken???”  C’mon ABC.

Scenario:  The two small Johnson children have a conversation about another little girl who is the only other Black student in the class with them.  They don’t refer to her as Black… because they don’t see color. Utterly absurd.  The entire episode chronicles Dre’s observation about being treated differently as a successful Black professional.  So the writer is telling us that such would not be the case for the small children in grade school? Again, this show is steeped in imbecilic comedy that reaches for a laugh but only serves  ramble all over the place, and insults far more than it amuses.

Scenario:  Dre gives in and decides to give his son a “hip-hip bro-mitzvah.”  What ensues is a gathering where Blacks (and a few whites) are gathered in buffoonish dancing, with one of them donning a ridiculously large gold chain.  Dre dubs this buffoonery as an “African Rite of Passage.” And this is “Blackness”, ABC?  I’m just asking, ABC.  What message are you really sending to Black Americans and all other American viewers?  Are you (ABC and Barris) asserting that the idiotic scenario’s and dialogue that exist within this sitcom is an example of Blackness and anything different is merely Black-ISH???

Dialogue:  Dre asserts to his family that he needs to have his family be Black.. and not Black-ISH.   Which leads Blacks across the nation to ponder… what exactly is “Black? ”  Trust me.. I’m right on this.  A large segment of the Black population are indeed asking this.

Barris is quoted as saying:  “… We wanted to do a show about a family that was absolutely Black.”   Black-ish is “absolutely Black???”  The sad part is that a fairly sizable number of Black Americans are feeling that this is true about Black-ish, which I digest with utter lamentation.

ARE WE A MONOLITHIC PEOPLE who all drink grape soda and eat fried chicken and are hip-hop enthusiasts??  In reality if one happens upon a hip-hop concert, what they will find is an arena full of White people cheering on Black hip-hop artists (as most Blacks are unable to afford the cost of attending).  So it’s evident that hip hop could not be synonymous with Blackness.  Black-ish again, relies so heavily on condescending stereotypes that it would be highly-unlikely that any progressive-minded Black American would be moved to favorably embrace this unpalatable production.

The acting in Blackish is first rate, in particular performances from the children.  Little Marsai Martin as Diane is a little charmer who alone could pied-piper viewers to into watching the show on a regular basis.  It’s my hope these young new actors will soon enough find new entertainment venues that will again showcase their talents.

Blackish is a television production that should have never been anywhere close to being green-lighted, at least not without some major fixes. Perhaps it could have been shelved for a season or two in order revamp and redefine itself, because in the end one gets the distinct impression that Black-ish isn’t sure what it wants to say.   It’s merely rife with one-liners and mortifying stereotypes that will  only serve to appeal to the most feeble-minded segment of the American population of television viewers.  But perhaps that’s the design.  More discriminating pop-culture enthusiasts are watching less and less network programming and wouldn’t be caught dead switching on to ABC to view the likes of a show like Black-ish.

ABC has filmed 12 more episodes for your family viewing.  Episodes that I hope will never all be viewed by the American public.  This show is an utter disgrace. Absolute trash. Zero stars.