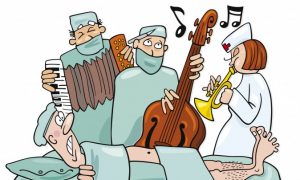 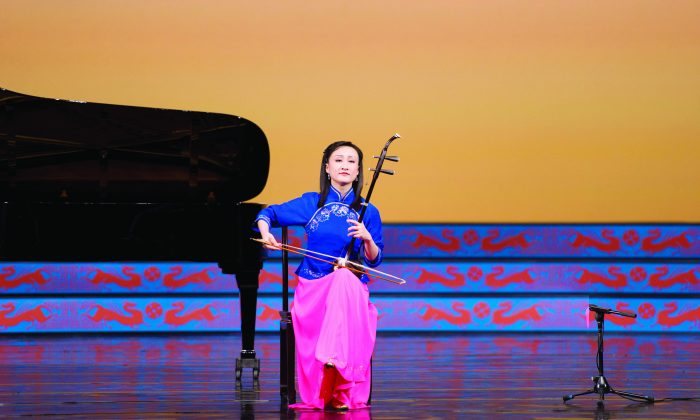 From the perspective of Chinese medicine, one of the best things you can do for your health is to listen to classical music live.

In Chinese, the traditional character for medicine is formed from the character for music, and Chinese medicine has long used music to treat ailments of mind, body, and spirit.

Every year, my family goes to see Shen Yun Performing Arts, a classical Chinese dance company with a full orchestra that combines both Western and traditional Chinese instruments. The effect of this music is powerful, and we, and nearly every guest we bring, feel renewed after seeing a performance.

Five Tones and the Organs

One of the most common scales in Chinese music is a five-tone pentatonic scale. The tones of this scale are: Gong宮, Shang 商, Jue 角, Zhi 徵 and Yu 羽. They are equivalent to do, re, mi, sol, and la.

Music with this scale can sound very soothing because it has no half-tones, which introduce tension.

According the first systematic book of classical Chinese medicine, “Yellow Emperor’s Inner Canon,” these five tones have a specific energetic affinity with one of the five major organ systems. They therefore nurture and energize different body systems and enhance different mental and emotional states.

Gong宮 (do): A music piece with Gong as the major tone tends to be peaceful, steady, soft, and smooth. Like the earth, it nurtures lives and embraces everything.

Gong empowers the energy of the spleen, which partnering with that of the stomach is in charge of digestion, metabolism, and energy production. The spleen nurtures the muscles and prevents bruising and bleeding. The spleen also empowers our thinking and ability to process information.

Therefore, music with a lot of Gong is good for people who tend to be nervous, bruise easily, have slow metabolism, poor digestion, and are prone to fatigue. It also helps soothe worry and enhances compassion.

An example of Gong music is the piece “Ambushed from Ten Sides” (十面埋伏 ).

Shang 商 (re): The sound of Shang is harmonious, nurturing, pure, and clear. Shang empowers the energy of the lungs. Partnering with the large intestine, the lungs are in charge of breathing and the distribution of vital energy (qi) to the entire body through blood vessels and energy channels.

The lungs also nurture the skin and hair, help regulate absorption and elimination of water, and defend the body from pathogenic energy from the outside. The emotion associated with the lungs is grief.

Therefore, music with the sound of Shang is good for people who are grieving or sad, those who easily catch colds, and those who have problems with their sinuses and respiratory systems.

Music with Shang can help you feel strong if you feel mentally weak, and it enhances a sense of loyalty and control.

An example of music with the tone Shang is “Cranes Cry in the Marshlands” (鶴鳴九皋).

Jue 角 (mi): The sound of Jue, is youthful, uplifting, and full of life. It reaches high and far and moves up and down smoothly and continuously.

The tone of Jue empowers the energy of the liver, which partnering with the gallbladder, is in charge of the free flow of energy and blood and the regulation of digestion, menstruation, moods, and sleep.

Therefore, music with Jue is good for people who are depressed or irritable or have headaches, pain, insomnia, and high blood pressure.

Jue also helps with strategic planning and judgment, soothes anger, resentment, and frustration, and helps vision. It can also strengthen tolerance and kindness.

An example of music with the Jue note is “Wonderful Moment” (春风得意).

Zhi 徵 (sol): The sound of Zhi is passionate, ascending, and gracefully joyful.
Zhi empowers the energy of the heart, which partnering with the small intestine, is in charge of the higher functions of the central nervous system, including cognition, sensory perception, and language.

The heart also nurtures the blood vessels and helps improve the complexion of the face.

Music with Zhi is good for people with poor blood circulation, heart problems, and depression. If the body is cold, music with the Zhi tone helps warm it.

Listening to music with Zhi can also enhance feelings of humility and respect.

An example of music with Zhi is “Be Lofty, Step by Step” (步步高).

Yu羽 (la): The sound of Yu is powerful and purifying, like a waterfall high up a tall mountain.

Yu empowers the energy of the kidney, which partnering with the bladder, is in charge of absorption and elimination of water, as well as the energy that nurtures the brain, bones, and hair.

The kidneys are in charge of sexual function and conception, and also help hearing.

Music with Yu is good for people who want to enhance self-control, physical agility, fertility, intelligence, memory, and concentration. It strengthens willpower and dispels fear and can make people feel happy to give.

An example of music with Yu is “Autumn Moon in Han Palace” (汉宫秋月).

Shen Yun is coming back to Lincoln Center in January, and my family will be there. It is a great performance for people of all ages and a very good opportunity to experience the healing power of traditional Chinese music.

Dr. Yang is a board-certified psychiatrist and is a fourth-generation doctor of Chinese medicine. His website is taoinstitute.com

Shen Yun’s four touring companies travel to countries around globe each year and have
performed in over 100 cities on five continents.