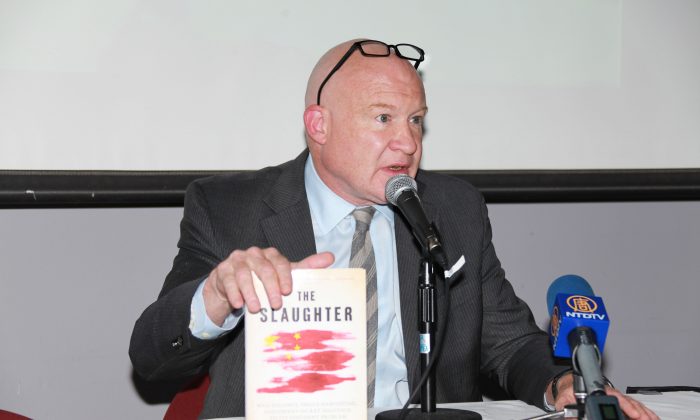 Gutmann reported his latest finding: a compound containing a hospital surrounded with a labor camp of 33,000 people in Xinjiang—the region in north western China—that has been subjected to imports ban by the United States over forced labor since late last month.

“Less than a kilometer away, you have another labor camp of 16,000 people and a crematorium,” Gutmann told EpochTV’s “China Insider” program.

“A twenty- minute drive away, you have an airport with a green lane, that is a human organ fast lane, for export only, out of Xinjiang,” he added.

According to the expert, the organs were transferred to a hospital near Shanghai.

“After this camp was built, the kidney transplants at the hospital went up 100 percent, while the liver transplants went up 200 percent,” Gutmann said.

According to estimates by researchers, the Chinese regime has detained more than one million Uyghurs and other ethnic minorities in internment camps in the far western region of Xinjiang, where they are subjected to torture, rape, forced labor, and political indoctrination by the Chinese Communist Party (CCP). The U.S. government and other Western democracies have labeled Beijing’s actions a genocide.

In Gutmann’s estimation, 25,000 to 50,000 Uyghurs are being killed for their organs every year—the number somewhat resembles that of estimates for Falun Gong adherents.

As the author of the book “The Slaughter,” Gutmann recalled the account of a witness describing how the crematorium stunk of human bones burning when driving by everyday.

From Falun Gong Adherents to Uyghurs

According to Gutmann, organ transplantation has become an industry after growing exponentially due to the exploitation of Falun Gong adherents in China.

Gutmann says the move was aimed at tissue cross matching.

“This is setting up the possibility of using these people as organ sources,” he said.

Later, with this camp popping up in 2016, the Chinese regime launched similar types of testing on every Uyghur above the age of 12.

“But it was concentrated in a single physical area, which made it much easier for the West to ignore it,” Gutmann noted.

And with some 1 to 2 million Uyghurs in labor camps, the authority also has in hand an enormous stable of readily available tissue types.

Despite the rampant ongoing atrocity, the medical community appears to still be misled by the Chinese regime’s rhetoric.

According to Gutmann, a lot of doctors in the West have wanted to help China in this area, claiming that the regime is trying to reform and that, “They may have done some terrible things, i.e. organ harvesting, in the past but that’s the past. And let’s look to the future.”

Yet, mounting evidence has, in Gutmann’s opinion, shown this to be the contrary.

“Anyone who is looking to reform China’s medical system, or wants to do anything cooperative, has to grapple with the evidence that I have just given,” he said.

“They have to start by explaining, ‘What is the transplant hospital doing in a slave labor camp during COVID?’” he said.

“For intelligent, reasonable, ethical doctors from the west to sign on to any of this is madness. It is a grave danger to the medical world,” Gutmann said.

Since 2006, a plethora of research, investigation, and testimony about the Chinese regime’s organ transplant abuses have emerged.

The 2019 London-based China Tribunal concluded that the Chinese regime has, for years, been killing prisoners of conscience for their organs for transplant on a substantial scale—a practice that’s still ongoing. It concluded that such actions amounted to crimes against humanity and that the main victims have been incarcerated Falun Gong practitioners.

Although the CCP in 2014 announced that it was ending its practice of using the organs of its prisoners, the evidence since then shows that China has been ramping up the practice of forced organ harvesting from the Uyghurs, Gutmann said.

Gutmann suggested grassroots efforts to raise awareness of the atrocity within the medical community.

People should bring it up to their doctors, their dentists … and question them if they have heard about the issue. They can also ask, “Why is the medical community so relaxed about this?”

Former ambassador at large for International Religious Freedom Sam Brownback has also urged all groups in civil society to push for answers. He also said that, given the poor human rights record of the Chinese regime in relation to the persecution of Falun Gong and the genocide of the Uyghurs, the United States should make human rights under the Chinese regime a mainstream foreign policy issue.

“If you don’t, as a government, stand up and protect religious freedom for everybody, everywhere, you’re going to have the clash of civilizations and a lot of violence around the world,” he added.

UPDATE: This article has been updated with a photo of a green lane in Xinjiang.