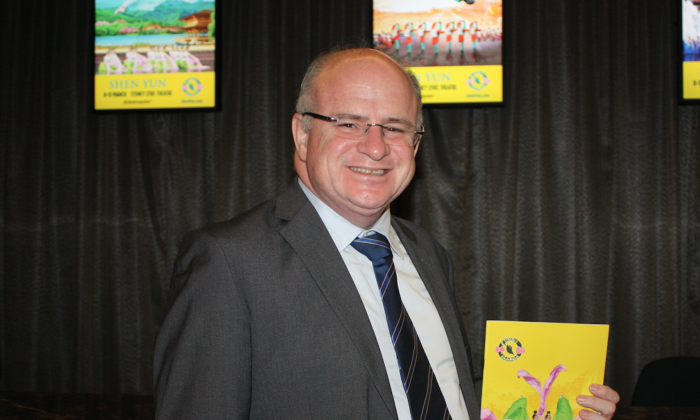 SYDNEY, Australia—Sydney, the city home to dazzling beaches, distinct landmarks, and diverse cultures, welcomed Shen Yun Performing Arts at the Sydney Lyric Theatre on 8 March 2016. The New York based company has been delighting Australian audiences since January this year as part of its annual world tour.

On its opening night, the curtain closed to a standing ovation as another successful performance concluded, leaving the full house of audience members mesmerised by the divine experience.

In the audience were Parramatta Councillors Andrew Wilson and James Shaw who left the performance with a deeper understanding of Chinese traditions and culture.

Councillor Wilson came to experience Shen Yun for the third time this year with his friends. He was once again impressed by the calibre of technical skill and found the performance exceedingly emotional.

He said his friends were moved to tears in the piece, “The Steadfast Heart”, which portrays the persecution of the spiritual meditation discipline, Falun Dafa.

“It was so touching—I could hear some friends quietly sobbing, and it’s a very moving piece,” Mr. Wilson said.

He further added that he was able to relate to the spirituality portrayed in the ancient stories and legends.

“I’m used to [seeing it] often in Western art—the best of it comes from the spirituality. And it’s no different with Eastern art. People are still people, and as we’ve seen without a religious and moral base you can do anything—people can go down to any level,” he said.

Councillor Shaw was greatly impressed by Shen Yun last year, so he returned to experience it a second time. He said that he finds Shen Yun to be an educational experience.

“It came last year – I learnt a bit. It came this year – I learnt bit more. Maybe by next year, when I see the show, I’ll know lots more. So it’s a good learning experience—educational,” he said.

After both experiences at Shen Yun, Mr. Shaw developed a growing concern with the oppression of Falun Dafa practitioners in China. He said that he really appreciates the opportunity to learn more about the meditation practice.

My view is that all human being should all be treated with dignity and respect whatever they believe.
— James Shaw

For Andrew Allan, the performance was an eye opener as it gave him new insights into Chinese culture. He left the theatre glowing with enthusiasm.

“I just started learning Mandarin. So you get a party line verse. And this is something completely different,” Mr. Allan said.

As a Chinese language student, he felt the performance gave him the opportunity to explore Chinese traditions on a different level to what he understood about modern China.

Chantelle Monjo and Joshua Baissari were amazed by the scale of the performance. The young couple, who were filled to the brim with joy,  felt they were being transported to a different place while watching Shen Yun.

“You could close your eyes and feel that you are somewhere else,” Ms. Monjo said in delight.

Ms. Monjo, a social worker and a Flamenco dancer, thought the cohesion of the dancers was unparalleled. The skill levels of the dancers employed in the dance, “Fairies of the Sea”, particularly blew her away.

“You can see all the dancers doing it exactly at the same time. It’s so rare, the teamwork as well. … Their cohesion as a unit is unparalleled,” she said in a tone filled with admiration.

“You see everyone move together as one, but you don’t actually notice that each person’s arm [is] at the exact angle that flows into the next one,” she added. “You don’t notice these things but I really notice it because it is something that I have to practise. So to see it done to perfection, first of all, it makes me slightly jealous and upset at myself, but second of all, it’s such a pleasure to watch.”

According to the Shen Yun website, Classical Chinese dance is grounded in divinely inspired culture and embodies traditional aesthetic principles rendering it a unique and meaningful art form. Performers are able to bring out the inner meaning of intrinsic thoughts and feelings, reflecting the peculiarities of human nature, the standard for human conduct, moral concepts, mental state, one’s value system through beautiful dance movements expressed in bearing and form.

Mr. Baissari, who also shared Ms. Monjo’s view on the dancing, felt his experience at Shen Yun was pleasantly surprising. He was particularly awed by the courage the performers had to combat adversity with peace.

“To know that these people are undergoing such persecution, and all they’re doing is being peaceful. That was really unnerving! And it was nice that they can express the fact they don’t like it, but also to combat it in such a peaceful form as well,” he said.