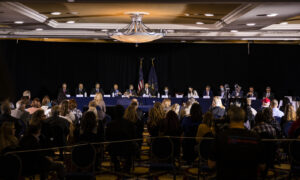 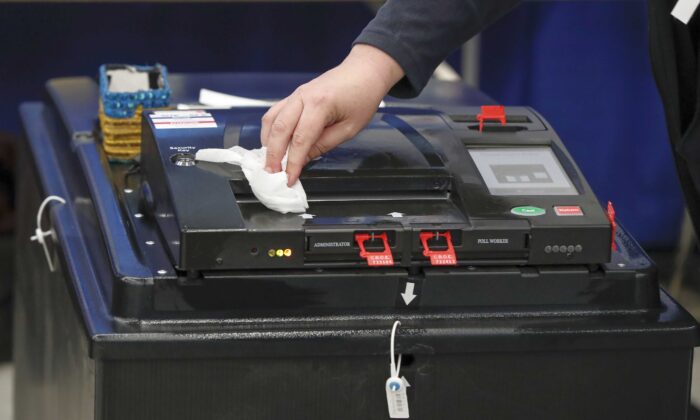 A voting machine is cleaned during the Illinois Democratic primary in Chicago on March 17, 2020. (Kamil Krzaczynski/AFP via Getty Images)
Pennsylvania

“For some reason, all the errors seem to go against Trump. And it’s unclear why that is,” Justin Hart told The Epoch Times.

Hart, who worked as digital director for former presidential candidate Mitt Romney in his 2012 bid, said that his analysis of the real-time tabulation from Election Day shows 25 instances in Pennsylvania in which votes were subtracted from the total.

President Donald Trump lost 97,676 votes during the 25 data reductions, while Biden had a net gain of more than 160,000 votes, Hart indicated. Hart used the data that The New York Times made available.

You know what's even MORE suspicious than BIG vote dumps giving Biden the lead in WI and MI? Taking AWAY votes from @realDonaldTrump in Pennsylvania!

This chart: the 25 data dumps where Trump LOST votes from the Dominion feeds.

When asked why votes would be deducted from a candidate, Hart said, “I honestly don’t know.” He pointed to the case in Antrim County, Michigan, where 6,000 votes allocated to Biden were reversed back to Trump after officials announced a “clerical error.” But the other instances remain unexplained.

“There’s just a lot of opaqueness into exactly why that was. I don’t have an explanation for it. Because it’s all black box,” Hart told The Epoch Times.

Hart said it appears a lot of security holes exist in the software used and the Dominion machines.

“At the very least, there are significant moments for user error in the way that they process votes and everything else,” he said. “It’s just really poorly designed software that has a lot of problems, a lot of challenges for user error and potential fraud.”

Dominion Voting Systems, which has been the subject of much scrutiny, has said that there were no issues with its machines on Nov. 3, and a spokesman has said it’s not possible to change votes from Biden to Trump.

“There are no credible reports or evidence of any system software errors in Georgia or Michigan, including erroneous reporting of unofficial results from Antrim County, Michigan,” Dominion said in a statement in early November.

The company has also denied other allegations about ties to Smartmatic—another voting systems company—as well as ties to foreign governments.

Hart noted more unusual activity in Georgia and provided two charts. The first shows a vote dump at 1:34 a.m. with Biden getting 82.4 percent of the share, which cut Trump’s lead in half. Hart said his analysis was based on the percentages—rather than raw vote numbers, which The New York Times didn’t provide.

The second chart depicts the Georgia tally resumption five hours later, and over the next days, thousands of votes for Trump are subtracted, Hart found.

Georgia timeline in 2 charts:
1) At 1:34AM Biden gets a dump with earning 82.4% of those votes cutting Trump's lead in half. Then, like Michigan and Wisconsin – the tallies stop coming in.

2) Things resume and over the next days Trump has thousands of votes "removed" taken away pic.twitter.com/ek0rj7Bsy7

“One of the things that we’re looking at is understanding: Why was there this distinct pause?” Hart said.

He said a colleague ran the same tests on Florida, Illinois, Minnesota, and Massachusetts—which all had high numbers of mail-in ballots—but these states didn’t have a pause in counting.

Trump retweeted the charts, and Twitter flagged them as disputed.

In Wisconsin 49K people voted for a Republican House candidate down ballot but DID NOT vote for Trump.

Meanwhile, 64K people voted for Biden and did NOT vote for a Democrat house candidate.

Also, 14,952 people DID NOT vote for a house candidate and just voted for Prez.

While he is quick to say he’s not asserting fraud per se, Hart noted that anomalies definitely exist.

“Generally, people recognize that this is an odd type of situation. And I think people wish they had more information, because it’s all vague, and all we have to go on doesn’t build confidence.”

Secretaries of state in Wisconsin, Pennsylvania, and Georgia have denied allegations of voter fraud or irregularities that would change the outcome of the election.

Hart calls 2020 a “sea change” election regarding the mass mail-in voting conducted in many states, which he asserts is more reason to have a transparent audit trail.

“But it also creates a vacuum for people to legitimately bring some critiques and say, ‘This is off, and off in a significant way where I can’t explain it through natural means.'”

This article was updated on Nov. 30 to include the interview with Justin Hart.