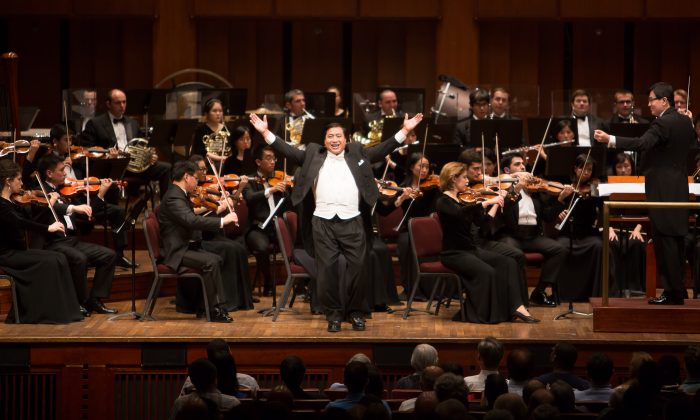 Tian Ge, a Gold Prize winner of the All-China Music Competition, sang in the bel canto style at the Shen Yun Symphony Orchestra at the Kennedy Center in Washington, DC, on Oct. 11, 2015. (Lisa Fan/Epoch Times)

WASHINGTON—At the Shen Yun Symphony Orchestra live performance at the Kennedy Center, in one moment one is sitting in a brightly lit concert hall; in the next, one is promenading with ancient Chinese princesses who wear long silk sleeves. Then, without ado, one is dropped onto a battle ground from the Three Kingdoms era. The violins’ staccato are zooming arrows.

Through a gripping and visceral concert, Shen Yun Symphony Orchestra (SYSO) has managed to encapsulate 5,000 years of Chinese civilization into one evening of music.

Sitting in the packed concert hall on the evening of Oct. 11, was Chen Guangcheng, the blind Chinese civil rights activist who is known for organizing a class-action lawsuit against China’s one-child policy.

During the Chinese Cultural Revolution from 1966 to 1976, calligraphy, paintings, classical books, and scriptures were burned. Temples and statues were smashed. Traditional holidays, etiquette, and forms of entertainment were never quite the same again in China.

“I think this orchestra holds an enormous capacity to revive some of the lost elements of Chinese culture,” Mr. Chen said. “This, I think, is the most important meaning behind these songs.”

“When the suppression ends, our culture will return,” he said. “For now, all we can do is try our best to preserve.”

An Assorted Group of Prestigious Artists

Shen Yun Orchestra is able to play a major role to revitalize traditional Chinese culture because it is comprised of world-class musicians who perform original compositions that connect the soul of Chinese music with the grandeur of a Western orchestra.

The conductors of the evening included Milen Nachev, who was formerly a chief conductor and artistic director for several major orchestras in Eastern Europe, and William Kuo, who was the founding conductor of the Taiwan Formosa Chamber Ensemble.

Shen Yun’s notable composers include Jing Xian, who studied ethnomusicology at Oxford University on scholarship, and Junyi Tan, who studied at the Central Conservatory of Music in Beijing and performed as a pianist for the China Opera and Dance Theater.

At the Kennedy Center, the audience saw the debut of violinist Fiona Zheng, who won several first prizes in China for her violin performance. Her interpretation of “Gypsy Airs” entrances the audience.

“Gypsy Airs” contains one of the most challenging violin solos in Western classical music. She is a force to reckon with, a violinist who classical music fans should keep an eye on.

Since ancient Chinese culture was deeply moored in Buddhist and Taoist philosophies, it was no surprise that the audience felt spirituality in the music.

When David Wallace, a 2014 Republican candidate for United States House of Representatives, was asked what he got out of attending the concert, he said: “Music elevates us into a spiritual level.”

“There’s a being greater than us that unites all people here on the face of this Earth,” Mr. Wallace said. “We all have a maker, a supreme being that we look forward to seeing once we leave the shackles of our bodies.”

As the concert ended, Donte Griffin, a rapper, was among the first to stand up to applaud. There was a particular stiffness in his body, as if he were clapping with all his might.

He stopped to take off his glasses and wipe away tears.

Mr. Griffin said he often listened to classical music and assured us that he usually doesn’t cry during concerts.

He said it was Shen Yun’s tenor Tian Ge who first brought him to tears that night.

Tian Ge, a Gold Prize winner of the All-China Music Competition, sang Chinese lyrics in the bel canto style during the performance.

“I couldn’t understand what he was saying, but I felt something spiritual,” Mr. Griffin said. “I’ve never heard anyone sing so loudly. It was so powerful. His voice gravitated to me, spiritually, to my soul.”

There were two encores. After each encore, Mr. Griffin immediately stood up again to clap in the same stiff manner.