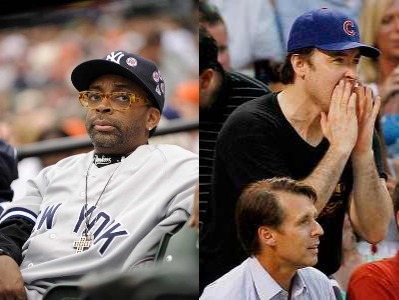 Writer-Director Spike Lee joined forces with actor and Chicago native John Cusack  earlier this morning at a press conference to stand up against critics of his new film Chiraq. Chiraq is the upcoming musical comedy about violence-ridden Chicago, written and directed by Spike Lee and starring a host of big name performers including John Cusack and Jeremy Piven (have these two former pals reconciled after their falling out a few years back?) Samuel L. Jackson, Common and Jennifer Hudson. The film is slated for a 2016 release.

The city of Chicago has often been tagged with moniker Chiraq – for being one of America’s most violent cities.   Spike lee asserts that critics are coming after the film unjustly because the have yet to even view a screening of the net yet released film.

Lee:  People who don’t…   “Know what the hell they’re talking about.”

Earlier today Lee participated in a press conference held on Chicago’s South Side, where the film Chiraq was filmed. In front of about two dozen members of the press, Lee reportedly noted that he felt it was time to set the record straight about the film and what it’s about, in an effort to quell the controversy fueled by people who Lee asserts –   “… don’t know what the hell they’re talking about”

Lee stood in front of the St. Sabina Church and defended his project. “We felt it was appropriate that we say what the narrative is… the filmmakers… the people doing this – not the people judging from afar.” the Academy Award nominated director explained.

Lee asserted that the film is about truth, justice and peace.  It is also about gang violence and Englewood.

Chicago Mayor Rahm Emanuel and other city officials have taken issue with the name of the film, citing that it serves as an insult and misrepresentation of law-abiding South Siders. But none of the critics were there, nor speaking at the St. Sabina Church.

Lee was heralded by St. Sabina’s pastor,  Father Michael Pfleger, as one of America’s finest film directors and praised him for bringing on local African American’s to work on the film.  “Sounds real right to me.” Pfleger said.

Lee stood amidst a sea of of Chicago residents who had lost their loved ones to violence. Many of them held up photographs of their deceased family members, and one woman held up an urn filled with the ashes of her daughter.

Chicago native and Actor John Cusack who stars in the film also took the microphone and asserted that the controversy surrounding the film production is “manufactured.”  He went on to say, “Art must be courageous, and anybody who wants a more peaceful America will understand where the heart of this film is…. it’s a film with a conscious. I love my city.  All of Chicago – and I would never do anything to hurt it.”

Lee also reminded those in attendance that his 1989 film Do The Right Thing was also steeped in controversy before its release, and wants to make sure that the good residents of Chicago relax before they jump to conclusions regarding a film that they know nothing about.

“There were people who said this film is going to cause riots all across America, that black people are going to run amok,” Lee said regarding his film Do The Right Thing.  He noted that those people were wrong then and that they are wrong now about Chiraq. “They are going to look stupid and be on the wrong side of history.” he said.

Lee did not take questions from the media, and only urged everyone to see the film before they placed judgment. He declared…  “I love Chicago…. wait until the movie comes out.”