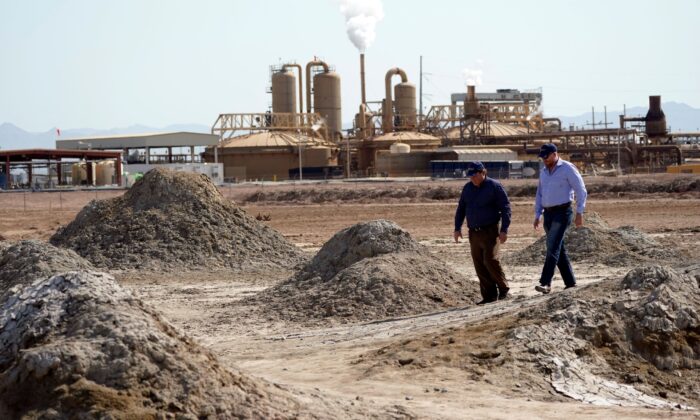 Rod Colwell, CEO of Controlled Thermal Resources (R), and Tracy Sizemore, the company's global director of battery materials, walk along geothermal mud pots near the shore of the Salton Sea, where the company is mining for lithium, in Niland, Calif., on July 15, 2021. (Marcio Jose Sanchez/AP Photo)
US-China Relations

As China already controls more than 85 percent of the global market for refining rare earth minerals, the U.S. defense industry could run into trouble if the imports of these elements are halted, according to Luisa Moreno, president of Defense Metals, a Vancouver-based mineral exploration company.

Rare earth minerals are used in various industries, according to Moreno, including in defense applications such as missiles, in agriculture to make fertilizers, and in medicine.

“If China was to stop exporting these critical elements to the United States, there will definitely be a crisis where we will not have them for some of the military applications,” she recently told Epoch TV’s “China Insider.”

Rare earth minerals are also vital for an array of green technologies.

And thus, she pointed out, the rest of the world is dependent on China for its transition to green technology.

“The U.S., for instance, needs these elements for electric vehicles to make permanent magnet motors and electric motors that go into electric vehicles. So … there are many other elements that are controlled by China,” Moreno said.

“China has spent decades researching promising technologies and exploring within the [country’s] boundaries, as well as outside, for these deposits,” she said. “And they have the technologies, and they are currently the experts in [the] processing of rare earth.”

Moreno also pointed to the Mountain Pass mine in California, the only U.S. rare earth mining site.

“They produce a concentrate, mineral concentrate before the rare earths are extracted,” she said of the mine. “And that is exported to China, where it is further processed into a chemical compound and then separated into elements.

“So that is essentially where China is getting a lot of other rare minerals to be processed.”

Moreno said that given the increasing demand for rare earth around the globe, China “is not going to be able to perpetually supply the world with the rare earth that we need for the various applications.”

The Chinese Communist Party has explored the possibility of limiting the export of rare earth minerals that are used in American F-35 fighter jets and other advanced weaponry, Financial Times reported last year.

Thus, the expert urged that the United States and its allies ramp up producing rare earth on their own to mitigate their reliance on China.

“Canada, United States together with the various deposits, could potentially with significant investments bring about more production of a mining of rare earth beyond what we have right now, in Mountain Pass, and then build the supply chain to be able to separate the elements and make metals out of them and compounds,” Moreno said.

“It’s important for governments in Canada, the United States, Europe, and others to support junior mining companies so that they can develop their projects and support the development of supply chains. Because if that does not happen together with the capital markets, we might end up in severe scarcity outside China for these elements.”