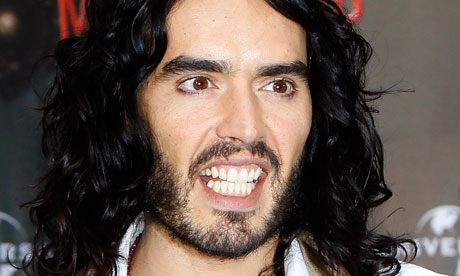 Rabblerouser Russell Brand - Will His Mouth Get His Career In Trouble?
News

Ironically enough it always seems that the most brazenly outspoken and solemn show business personalities tend to be those in the business of making us laugh.  British comedian Russell Brand certainly stands at the vanguard of celebrities and comics candidly offering up their tuppence on socio-political issues.

More recently Brand went head-to-head with Fox News’ Sean Hannity.  Brand posted a video on his YouTube Channel:  The Trews.  The satirical and mocking commentary was directed expressly at Hannity regarding Hannity’s recent interview with a Palestinian American.   After spending a few moment’s merely ridiculing Hannity with bits of anecdotes such as Hannity’s uncanny resemblance to the Ken doll from the Toy Story 3 movie,  Brand proceeded to move in for the jugular.  He essentially berated Hannity for his  unprofessional attack on his Palestinian guest as seen in the video below. It has since become The Trews most watched video – raking in  2.4 million viewers to date.

Hannity subsequently counter-attacked Brand dubbing him a D-list actor who is best known for his failed marriage to singer Katy Perry.  Since then Brand and Hannity have embarked on a video clip battle of wits that, for my money, serves as a far more engaging watch than NBC’s The Voice which airs on network television about I-don’t-how-many-times in a week.

I took notice of Russell Brand’s elevated sense of consciousness about four years ago via another You Tube interview.  I was pleasantly taken aback by Brand’s obvious  intellect,  and erudite ability to match wits with his counterparts. Albeit, as a comedian, you’ll find Brands consciousness well in line with the likes of Lenny Bruce, Paul Mooney, Dr. Bill Cosby, George Carlin and others.

Hannity’s D-List remark isn’t likely to frazzle Brand.  If Brand has landed on the D-List it’s most certainly by his on conscious doing.  Brand was on the road to becoming a household name by the time he’d landed the role in the hilarious 2010 comedy Get Him To Greek.  It was somewhere around that time that Brand, of his own accord (much like Dave Chappelle), decided to take two steps back from film industry superstardom.

Brand (a former drug addict and friend of the late singer Amy Winehouse)  began to spew remarks against the entertainment industry that would most certainly land him in the industry dog house.  He has since been unapologetic, but one must wonder if his candor against the industry will undo his show business career.  If we are to examine the mindset of Russell Brand, we might come to the conclusion that Brand’s untamed and  audacious tongue will do nothing more than effectuate a condition that Brand is already more than comfortable with.

Brand is still garnering fans the world over.  In this age of social media, entertainers are finding a new medium of self-expression via the internet.  Sites such as YouTube are heavily utilized by a number of entertainers.  Brand continues to connect with literally millions of fans via his YouTube channel: The Trews.   A YouTube channel doesn’t require a screenwriter, producers, directors, publicists nor distribution.  Only the faithful eyes of those who support you and even the eyes of some who don’t.  Let’s not forget that even negative attention gets recorded as attention.

Hence,  Brand simply may not require the type of attention that is acquired at a United Artists movie theater.  YouTube and the D-List seems to be suiting Brand just fine… at least for the time being.