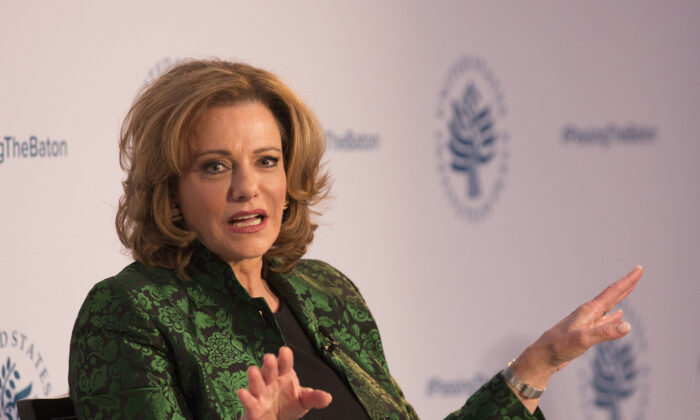 The United States is facing the greatest strategic threat in history with the new partnership between Russia and the Chinese regime, according to K.T. McFarland, former deputy national security adviser under the Trump administration.

McFarland made the remarks in an interview with EpochTV’s “China Insider” at the Conservative Political Action Conference (CPAC) in Orlando, Florida, on Feb. 26.

Russia and China now boast a “no limits” partnership after Russian President Vladimir Putin met with Chinese leader Xi Jinping on Feb. 4. The unprecedented partnership was declared in a 5,000-word joint statement, and the two bordering nations also said there would be “no ‘forbidden’ areas of cooperation.”

China sided with Russia to denounce the enlargement of NATO, while Russia took up China’s position on Taiwan, calling the self-governing island “an inalienable part of China,” according to the statement.

The lengthy statement, coupled with China’s recent decision to abstain from voting on a U.N. Security Council resolution demanding that Moscow stop its attack on Ukraine, shows that Putin and Xi “are in cahoots,” according to McFarland.

Once Xi decided to make a move against Taiwan, she said it was absolutely certain Putin would reciprocate by repeating China’s political stance on the self-ruled island.

“I think that may be the mind game they’re playing,” McFarland said.

The Chinese regime has repeatedly refused to denounce Moscow’s military aggression against Ukraine and has also objected to calling Russia’s attack an invasion.

On Feb. 28, China sided with Russia again, when both nations voted against a decision by the U.N. Human Rights Council to hold an urgent debate on Russia’s invasion of Ukraine.

In October 2021, Xi vowed that the “reunification” of Taiwan with China would “definitely be realized.”

Taiwan, a de facto independent entity, has announced that it will impose sanctions on Russia. On March 1, Taiwanese Premier Su Tseng-chang said Taiwan will join moves by the United States and others to block certain Russian banks from the SWIFT international payments system.

Taiwan’s microprocessing industry produces some of the world’s most advanced semiconductors, which are tiny chips that power everything from smartphones, computers, and fighter jets to missile systems. The island is home to the world’s largest contract chipmaker, TSMC.

In other words, McFarland said the United States would face a supply chain crisis if China were to gain control of Taiwan’s manufacturing plants that are producing these chips.

The communist regime’s ambition isn’t limited to taking over Taiwan.

“China doesn’t want to just be the most important country in the world and the global world order of the post-war period,” McFarland said. “It wants to smash that international order and recreate an order where China, like the good old days of thousands of years ago, sat in Beijing and all the vassal nations came and offered tribute while they kowtow to the emperor.

“The Chinese plan is to pick us all off one at a time—pick off Taiwan and maybe pick off Vietnam and then work his way around, pick off Australia.”

As such, the Chinese regime’s current partnership with Russia will be short-lived, she said.

“At the end of the day, the Chinese are going to turn on the Russians, too, once they get what they want out of the Russians,” McFarland said.