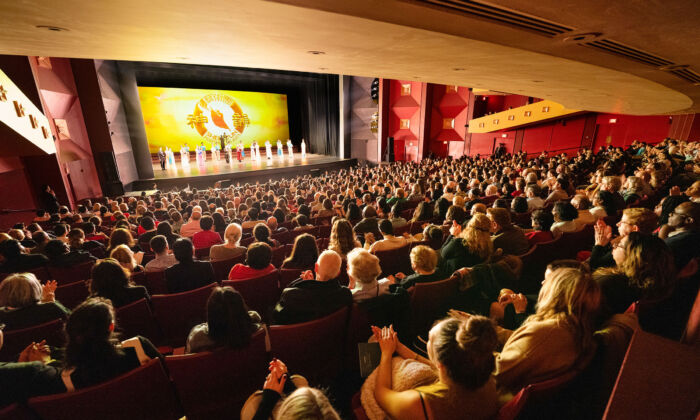 While audiences in upstate New York were preparing to watch a classical Chinese dance performance by New York-based nonprofit Shen Yun, hecklers appeared in front of the venue.

Shen Yun, which means “the beauty of divine beings dancing” in Chinese, according to its website, seeks to revive 5,000 years of Chinese civilization through music and dance. Founded in 2006 by artists in exile, the company was established to present traditional Chinese arts, free of censorship from the Chinese regime.

So what was the motive behind the heckling? To comply with the Chinese regime’s censorship agenda.

Beijing has continually sought to sabotage Shen Yun’s performances in the United States and elsewhere in the world; its latest attempt involved a New York-based front group for the Chinese Communist Party (CCP).

At about 6:30 p.m. local time on Dec. 20, Li Huahong, the head of a CCP front group known as the Chinese Anti-Cult World Alliance (CACWA), led a group of 25 people into the Purchase College theater lobby, claiming that they wanted to buy tickets.

The group frequently appears at venues where Shen Yun is scheduled to perform and displays posters and banners that malign the company. They are also known to harass and intimidate local adherents of Falun Dafa, a spiritual group that is currently banned and heavily persecuted in mainland China.

Some of Shen Yun’s performances depict the ongoing persecution of Falun Dafa in China.

Li and her entourage didn’t buy tickets but instead yelled Chinese-language insults at Shen Yun staff in the lobby.

Soon after, the theater’s security staff forced the hecklers to leave. One of the security guards told Shen Yun staff: “Please don’t worry! We will make sure the show can perform without interruption. Here is neither China nor Hong Kong.”

One audience member shouted, “You guys go back to Communist China!”

Once outside, Li and her group held poster boards with false messages about Shen Yun and Falun Dafa.

The following day, Li and her group arrived at the Purchase theater in a bus, prior to Shen Yun’s 2 p.m. show. They again stood outside the theater with their posters. Afterward, the group left on the bus.

When the bus returned to the theater in the evening, only some in the group stood outside the theater again with their posters.

Audience members were critical of the Chinese regime’s interference toward Shen Yun.

“[Shen Yun is] so fabulous. It’s just wonderful. I really love it. Everybody should see it. It’s really great,” painter Betsy M. Fowler said in an interview with The Epoch Times after she watched the Dec. 22 performance in Purchase.

“When I first saw this protest, I felt … they were paid to stand there, hold the signs that they were told to say,” a salesman who identified himself as Rudy told the Chinese-language Epoch Times on Dec. 21. “They were not authentic. They were not genuine. They were not emotional. They were not with passion.”

A business owner named John told the Chinese-language Epoch Times at the theater on Dec. 21, “In a situation like this, where there is art and music, the protest doesn’t belong here.”

Chinese immigrants previously hired by Li told The Epoch Times that CACWA receives funding from China’s Tianjin City Political and Legal Affairs Committee. Those hired by the group are paid to participate in the group’s activities.

The Political and Legal Affairs Committee is a CCP agency that oversees all law enforcement authorities, including the police force, in China. Each regional government in China has a branch office of this agency.

On Feb. 9, while local residents were celebrating the Lunar New Year in Flushing, a neighborhood in the New York City borough of Queens, Li was observed instructing people to stand behind police barricades among the spectators and carry the Chinese regime’s national flag. About 100 flag-bearers were stationed along the parade route.

An African American man told a reporter that he was paid $200 to carry a flag, adding that last year, he was paid $20. Another male, an apparent coordinator who was giving out flags, was observed telling recipients to keep their red envelopes safe, adding that the payment was $30. Red envelopes containing cash gifts are traditionally given out during Chinese New Year.

Peter Tu, chairman of the Flushing Lunar New Year Parade and executive director of the Flushing Chinese Business Association, said that the display of the flags was upsetting to him, adding that his association had declined to allow Li’s group to join the parade, but he couldn’t stop people from waving Chinese flags on the sidewalks.

In 2013, Li was found guilty and sentenced for assault with intent to cause injury, for an incident in which she beat a man named Cheng Changhe, after the latter tried to stop her from assaulting a Falun Dafa practitioner.

According to court documents, Li has been sued multiple times since 2011 for physically assaulting Falun Dafa practitioners in Flushing, where local adherents often distribute fliers about the persecution of the group in China.

The CCP has used a variety of methods to interfere with Shen Yun since the arts company’s founding, such as threatening venues and local governments to stop them from hosting Shen Yun; sabotaging Shen Yun’s tour buses; arranging for China-based performing arts groups to perform at the same venues as Shen Yun; and hiring internet trolls to sway online opinion against the company.