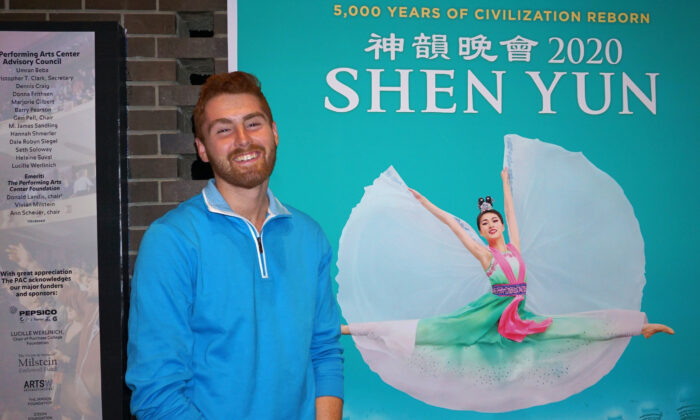 PURCHASE, N.Y.—Shmuel Schuck, a college student, watched Shen Yun Performing Arts on Dec. 22, 2019, and was amazed to see the worldview the dance company sought to present.

New York-based Shen Yun has a mission of reviving the 5,000 years of Chinese culture, and Schuck thought the spirituality of it was wonderful and necessary for the world. That Shen Yun dared to show stories about God and the Creator itself is unusual in our modern world, Schuck said, and some might even call it politically incorrect, but what the artists presented was really about the soul.

“If there’s only what’s here in the physical then there’s nothing beyond that. And that destroys all hope and everything. That destroys a purpose and a meaning and a sublime beauty that exists in all cultures. And that’s what communism is actively trying to destroy,” Schuck said at the Performing Arts Center in Purchase, New York.

Communism took control of China during the 1940s, and from that moment forward, China’s traditional culture and history were subject to a series of campaigns aimed at eradicating and subverting it in favor of atheism.

Shen Yun, which is based in New York, is on a mission to undo the damage that was dealt with throughout the decades by sharing the wonders of classical Chinese dance and music with the world.

Schuck felt the experience was more than just a visual or physical one, but almost meditative.

“I’m deeply in my soul, that was the place they put me in,” Schuck said.

Painter Betsy M. Fowler, who has seen Shen Yun before, remarked at the many visual wonders of Shen Yun’s performance.

She was astounded by the acrobatic feats of the male dancers, saying that they were, “outrageously talented.”  In regards to the female dancers, Fowler said, “The women move so smoothly as if they’re pieces of silk.”

“It’s so fabulous,” Fowler said. “It’s just wonderful. I really love it. Everybody should see it. It’s really great.”

Fowler was married to the late Jim Fowler, a naturalist and zoologist, best known for being the host of “Wild Kingdom” and “Animal Planet;” she was involved in his projects and traveled the world, creating paintings of animals in India, Africa, China, and other places.

As a painter, Fowler was greatly inspired by the visual design, the colors, and the artistry of the performance.

“I mean, the orange against the turquoise is so beautiful. And the men, the men’s costumes are so elegant and beautiful. Everything about is just so sensitively done,” the artist said.

“They are the best. They’re the best in the world,” she said. “They’re so talented, all of them. Just wonderful.”

With reporting by NTD Television, Sally Sun, and Don Tran.