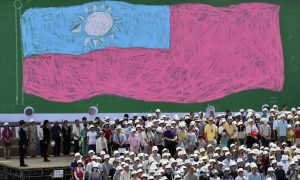 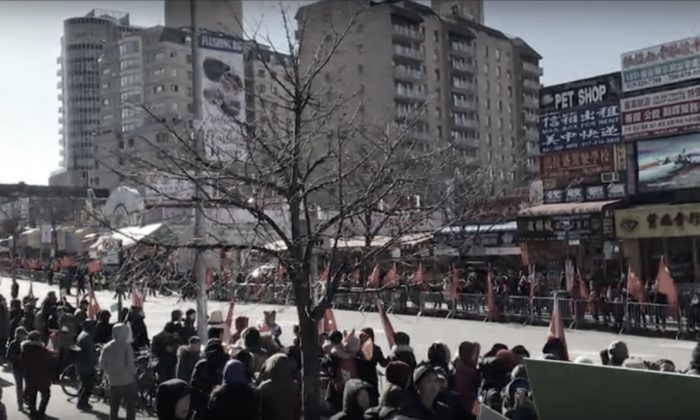 Dozens of people hold Chinese flags along Flushing's Main Street just before the start of the Lunar New Year Parade in Flushing, New York City on Feb. 9, 2019. (The Epoch Times)
US News

NEW YORK—The main street in Flushing, Queens, was lined with more than 100 large Chinese flags, rising like crimson peaks above the crowds and billowing violently in the wind, as revelers welcomed the Year of the Pig at the annual Lunar New Year Parade.

Parade-goers were greeted not only with dragon dancers and performers donned in traditional Chinese dress, but also the sight of more than 100 Chinese flag-bearers stationed behind police barricades along the parade route on Flushing’s Main Street on Feb. 9.

The flag-bearers were spaced roughly six feet apart for the length of about five blocks along the main thoroughfare of the bustling Chinese enclave. Each wielded identical five-star flags—a symbol of the unification of China under the Chinese Communist Party (CCP)—which stood at roughly eight feet and filled Main Street with the blood-red color that signifies the Party. No American flag of comparable size could be seen along the street.

A reporter from the Chinese-language Epoch Times at the parade observed a group of people distributing the Chinese flags outside an entrance to the Main Street subway station at roughly 10:30 am, half an hour before the parade started. After receiving their flags, the bearers then moved to designated positions along Main Street, with each person positioned at a police barricade.

Reporters from The Epoch Times and sister media NTD Television, posing as bystanders, asked several flag-bearers whether they could also carry a flag. One flag-bearer told a reporter that only people who pre-registered were able to carry one and that they must stand in an area designated by the organizer.

One male flag-bearer of African-American appearance told a reporter that he was paid $200 to carry the flag this year, adding that last year he was paid $20. Another male, an apparent coordinator who was giving out flags, was observed telling recipients to keep their red envelopes safe, adding that the payment was $30. Red envelopes containing cash gifts are traditionally given out during Chinese New Year.

A middle-aged man wearing gray was also observed telling people around him, “If people ask you whether you get money [for holding the flags], tell them there’s no money.”

At 11 a.m. at the start of the parade, Li Huahong, the head of a CCP front group known as the Chinese Anti-Cult World Alliance (CACWA), was observed instructing flag-bearers in the area to unfurl their flags. She also was seen ordering flag-bearers to stand in their designated area. In the past, the CACWA has harassed and intimidated local adherents of Falun Gong, a spiritual group that is currently banned and heavily persecuted in mainland China.

The CACWA is currently banned from participating in the Flushing Lunar New Year parade after violating the organizer’s rules in a previous year. The group had displayed Chinese flags during the parade, in breach of a rule stipulating that participants must only carry American flags. The group also put up banners bearing hate speech against Falun Gong on their float.

The group also was behind the recent protests at Lincoln Center in New York against Shen Yun Performing Arts, a New York-based classical Chinese dance company whose mission, according to its website, is to revive 5,000 years of traditional Chinese culture. The company’s portrayal of a divinely inspired civilization and the ongoing persecution of the spiritual discipline Falun Gong has drawn ire from the communist regime.

Peter Tu, chairman of the Flushing Lunar New Year Parade and executive-director of the Flushing Chinese Business Association, said he was upset after seeing the spectacle during the Feb. 9 parade.

Tu said this was the second year the flag-bearers were present in the spectator crowd, but there appeared to be even more Chinese flags this year.

The local community leader said he could not stop people from bearing the Chinese flag on the sidewalks, but implored that they should also carry the American flag, as a sign of respect for the country that they’ve adopted as their home.

“The American government [has given] us a lot of opportunity to let us have freedom, to have [the] opportunity to make business as well as we can,” he said.

Tu said that this behavior hurt the image of Asian-Americans and undermined efforts to bridge the cultural gap between the community and mainstream America.

Many parade-goers also expressed disappointment with the display.

One middle-age woman was observed telling a flag-bearer: “You’ve come to America where you can enjoy freedom, but you want to convert this place to [China’s] Shandong province. You’re digging your own grave.”

One parade-goer told a reporter, “These people should be investigated, find out what their background is.”

One man told a reporter that Li had previously offered him money to stand for an hour holding the flag, and told him to escape if people took photographs. The man said he refused Li’s offer.

Another said: “The five-star red flag is a kind of evil. It represents dictatorship, a fascist uprising.”

Experts have increasingly warned about the Chinese communist regime’s efforts to co-opt overseas Chinese communities as part of its campaign to expand its influence in Western countries, including in the United States.

The CCP targets diaspora communities through its United Front Work Department (UFWD), a party agency tasked with spreading Beijing’s agenda overseas. As detailed in his 2018 book, “Silent Invasion: China’s Influence in Australia,” Clive Hamilton, professor of public ethics at Australia’s Charles Sturt University, explains that the UFWD seeks to infiltrate and co-opt overseas ethnic Chinese communities to both silence dissident voices and shape a sympathetic stance from Western societies towards the regime.

“Beijing … views Chinese Americans as members of a worldwide Chinese diaspora that presumes them to retain not only an interest in the welfare of China but also a loosely defined cultural, and even political, allegiance to the so-called Motherland,” the report says.

“Such activities not only interfere with freedom of speech within the United States but they also risk generating suspicion of Chinese Americans even though those who accept Beijing’s directives are a very small minority.”