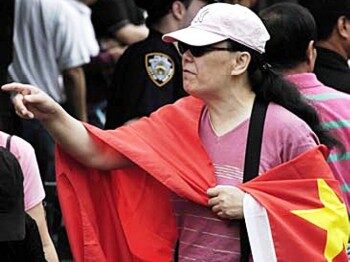 Li Huahong wrapped in a Chinese regime flag on May 31, 2008, in Flushing. Li is known for spreading propaganda to Chinese people in Flushing. (The Epoch Times)
China

NEW YORK—A woman who has been assaulting Chinese people in Flushing due to their practice of Falun Gong, a spiritual discipline, was convicted at Queens Criminal Court on Jan. 8.

Li Huahong was sentenced for assault with intent to cause injury after hurting a man who tried to prevent her attacking a female Falun Gong practitioner in August, 2011. Cheng Changhe, 58, became Li’s target when he tried to intervene, initially holding onto his bag.

“She was clutching and would not let go,” Cheng recounted in a past interview. “She then grabbed my shirt and was punching me violently, pulling it back and forth.”

Suddenly, about six men in their 40s and 50s appeared on the scene.

“I didn’t know there was a trap there. Apparently there are people sitting around at a restaurant who come as soon as they get a call from her,” Cheng said.

They surrounded Cheng while Li was still holding his shirt; then they joined in.

“They thought I was a Falun Gong practitioner. When I told them that if they wouldn’t stop I was going to fight back, they realized that I am not,” Cheng said.

He proceeded to pull Li’s hand off his collar, at which point she clawed at his face, removing a strip of skin from below his chin. Li simultaneously grabbed Cheng’s bag.

Li pulled down on the bag and sat on it while crying out, pretending that she had been punched.

Li has previously been charged with grand larceny and assault in a number of cases. She was a major protagonist during an eight-week-long attack on Falun Gong practitioners in the streets of Flushing in 2008 while John Liu was a city council member for the district.

Li’s violence and the hate propaganda she distributes all target Falun Gong, a Chinese meditation practice that teaches truthfulness, compassion, and tolerance.

She often sets up a table on Main Street, Flushing, to disseminate materials attacking Falun Gong in the style used by the Chinese Communist regime since it launched its persecution campaign against the practice in 1999.