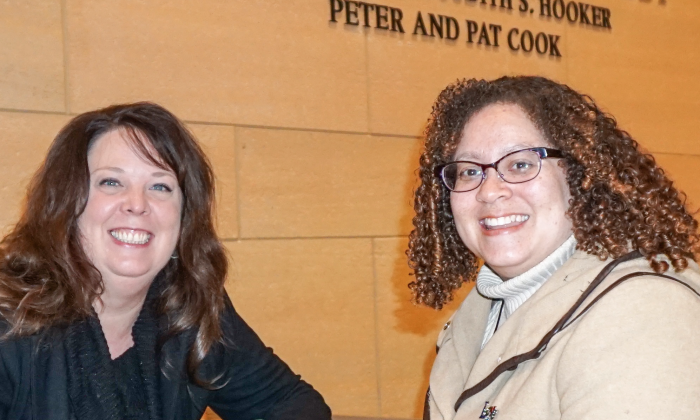 GRANT RAPIDS, Mich.—Perhaps only a teacher could see the full potential of what Shen Yun Performing Arts might offer children.

“I was wishing that more children could have the opportunity to see this because even for us as adults, it brought to our minds and gave us different ideas of what other cultures are like around the world [through] the music and the dance and the expression, so I was actually thinking it would be wonderful if children could see things like this,” Grand Rapids music teacher Juliana Clink said. She saw Shen Yun on Dec. 30 at DeVos Performance Hall.

Through music and dance, New-York-based Shen Yun brings 5,000 years of divine culture from the land of China to life on stage, and Ms. Clink felt that each of these elements could benefit children.

Just as children benefit at Christmas from seeing “The Nutcracker” as an introduction to ballet, she said, this production offers a full orchestra, comprised of both Western and Chinese instruments. Some children have never even heard an orchestra.

Shen Yun also offers classical dance that, in addition to being known for its expressiveness and its otherworldly grace, offers another exciting element.

“That acrobatic, the gymnastic feel, I think a lot of kids will be extremely fascinated and drawn in,” she said.

Classical Chinese dance “involves learning combinations of leaps, turns, flips, spins, and other aerial and tumbling techniques,” according to the website. And gymnastics and acrobatics had their beginnings in this art form.

Then there’s the music. “It was a wonderful introduction for people who are newer to the Chinese music,” like children, Ms. Clink said, because the familiar sounds of a Western orchestra draws the listener in. At that point people would start to recognize the less familiar sounds of the Chinese instruments playing the melodies, which would be exciting to hear.

Of course there is the educational aspect, the cultural exposure. Drawing from its 5,000-year history, Shen Yun depicts legends of the past as well as stories from China today in order to expose viewers to an overview of the culture and its cherished values.

Ms. Clink said that there are a lot of Chinese stories that we in the West are totally unaware of and this kind of exposure would surpass reading a book.

“It becomes so much more alive, and it opens up your mind in different ways and you make new connections, and then you could be more creative too as you learn these things and you go back to your school and start writing more stories yourself and start understanding other places in the world that are like you. … Just have different ways of looking at things. So, yes, I think it would be very beneficial,” she said.

There is also the spiritual element which even adults could benefit from.

In the West today, in trying to be politically correct, people hesitate to express spirituality, she feels. Yet people still seek it.

People are “seeking to understand where they come from and where their destination is going to be, so having opportunities to discuss things like this is really important for people who are seeking things out, and to share [it] together,” she said.

This is vitally important because it offers people hope.

She felt happy and grateful, after seeing Shen Yun. “Like letting the world of your daily life disappear, and walking into another world, it felt very magical. It felt like we were in another place.”

“It just felt very fun and very welcoming and a joyful celebration is what I felt like,” she said.