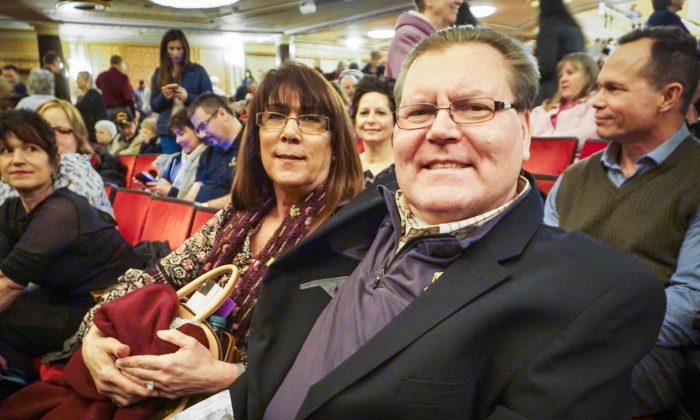 The couple said the graceful dancing, coupled with the cultural content presented at times with a layer of subtle humor, made for an enjoyable experience.

New York-based Shen Yun was formed in 2006 by artists who wished to revive the authentic traditional Chinese culture and share it with the world. It’s a civilization 5,000 years strong, believed to be divinely inspired, and passed down unbroken until just decades ago when communism took power.

One of the things that Mrs. Kozak was particularly impressed with was how not only did portions of the program depict aspects of ancient Chinese history and culture, but how it related to contemporary issues as well—particularly how freedom of expression is still very suppressed under the current communist regime, and how people today are still persecuted for their beliefs.

Throughout the history of China, people believed in harmony between heaven and mankind. Values and virtues such as benevolence, justice, wisdom, and propriety played an integral role in not just Chinese culture, but, as the Kozaks pointed out, many traditional cultures.

“Values—that is so important in every country, it really is,” Mr. Kozak said. “Sometimes I think we are losing it here but I am glad to see that you guys are holding on to it, very nice, very nice.”

Mr. Kozak added that the performance illustrated there was this connection between heaven and humankind, and this was a good thing.

“There always has to be a connection. Hopefully we are all blessed to have a beautiful heart and we have that connection with our master up in heaven, definitely,” he said.

Mrs. Kozak agreed. “I love that they are showing the connection between heaven and mankind. I think that’s an absolute beautiful thing,” she said.