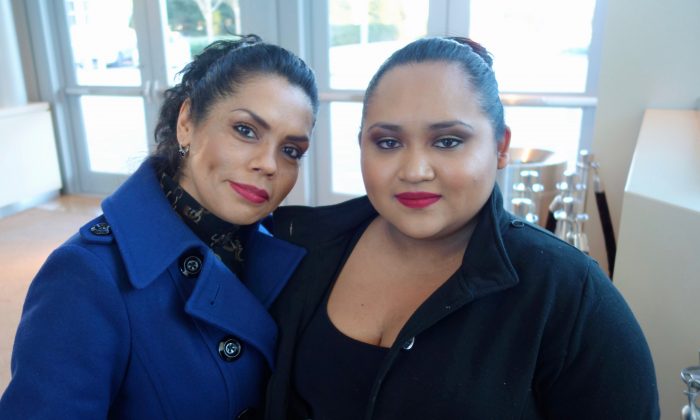 ATLANTA—A pair of ladies sat very close to each other on a plush red bench at Cobb Energy Centre, wearing bright red lipstick, with neatly coiffed hair. They were aunt and niece, from Gainesville, Georgia, about an hour north of Atlanta.

They had just seen Shen Yun Performing Arts for the first time on Jan. 17. Yesenia Ramirez spoke in Spanish while her niece Samantha Loyo translated.

Shen Yun “was amazing, amazing!” “I don’t know how else to describe it, but it was wonderful,” Ms. Loyo said, translating for Ms. Ramirez, who is a dental technician.

“I felt the same thing, it was great,” said Ms. Loyo, who is a hostess.

Most of all, Ms. Ramirez felt moved by the Chinese dance story “The Steadfast Heart.” In that dance, an old couple are persecuted for their faith. “But then, in the midst of their despair, a heavenly scene unfolds,” the program book says.

She said she was crying, it was so emotional
— Yesenia Ramirez

“She said she was crying, it was so emotional,” Ms. Loyo said. “Especially the part about the religion, where they were persecuted. It was touching. So touching. The old couple—yes, that was very sad, very emotional. Happy and sad—everything at once.”

Ms. Loyo explained that her aunt believes that “you should stand up for your beliefs,” so she could connect with that dance piece. Ms. Ramirez nodded emphatically and laid her hand on her heart.

Ms. Ramirez also loved the music: “It was wonderful … beautiful.” Shen Yun Orchestra blends the singular beauty of Chinese melodies with the precision and power of the Western orchestra, according to the program. All the music is written for the performance.

Both ladies had a message for the artists of Shen Yun: “They were amazing! I loved it so much! They were wonderful,” Ms. Loyo said. “She [her aunt] said they were amazing. She had a wonderful time. She’s happy!”

Her warm smile and glowing eyes seemed to show that she was sincere.