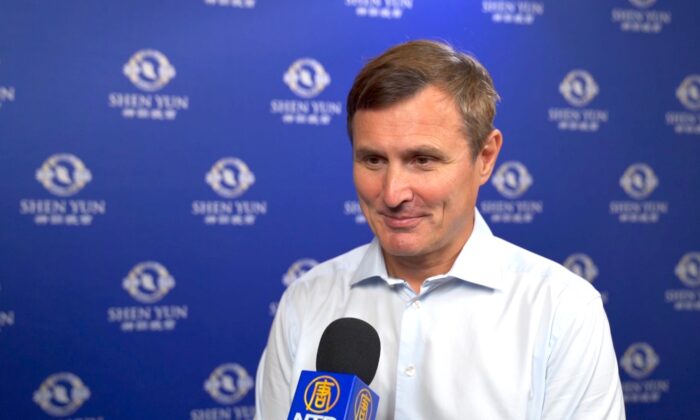 SYDNEY, Australia—Sydney lawyer Matthew Bransgrove said he was very impressed by Shen Yun Performing Arts after watching the world-renowned performance for the very first time as it begins its 2020 Australian tour.

With performances at Sydney’s Capitol Theatre through until March 22, Shen Yun has tasked itself with the mission of reviving China’s 5,000 years of divinely-inspired traditional culture that was once almost lost with the fall of China to the communist despot Mao Zedong.

Bransgrove said he agreed that Shen Yun’s mission is “very important” and was encouraged to see that Shen Yun’s New York headquarters meant that “the flame of freedom is alive in the West,” which “can act as a sanctuary for the Chinese people” from communism.

Shen Yun is currently not allowed to perform in China because the communist regime views traditional culture as a threat to its power. This was demonstrated by the regime’s decades of political campaigns aimed at eradicating China’s rich cultural heritage.

Bransgrove said the stories that the Shen Yun dancers communicated were “very, very impactful” for him, particularly the ones that shared the common human story of a people’s struggle against a despotic power “trying to suppress the human spirit.”

“Europe went through the dark ages. Obviously, China, going through this communist phase, is having the same problem.”

“Ultimately, it will be stamped death. And we can all look back and curse Karl Marx for his poisonous idea.”

“It’s good to see the Chinese are standing up for themselves,” Bransgrove said.

With reporting by NTD Television and Melanie Sun.