Senior Banker on Shen Yun: ‘You feel like you want to get up and make a better world’ 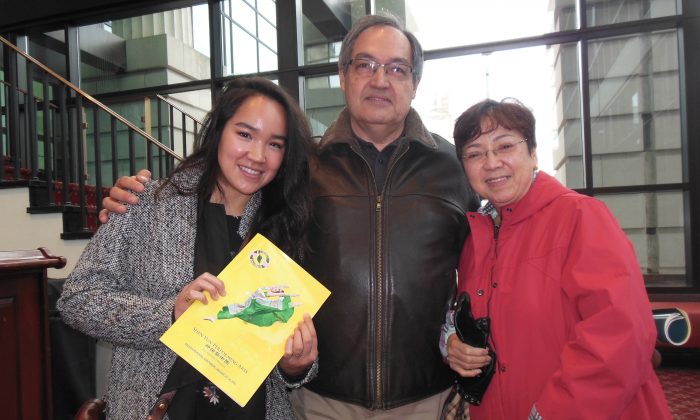 RALEIGH, N.C.—Julio Quinones, who used to be senior vice president of Wall Street banks before becoming, as he joked, “just a senior citizen,” saw Shen Yun Performing Arts in North Carolina on Saturday afternoon Jan. 23, and said that it gave him happiness and hope.

Mr. Quinones was attending the matinee performance with his friend, Stacy Miller, an English teacher. “I thought it was really marvelous, especially the color, and the synchronization,” he said. “I was entertained today.”

But it was not merely the surface beauty in the performances, the exquisite costumes and music, that caught the imagination of Mr. Quinones.

“I noticed that as the programs went on, there was a lot … you said, journey of the soul,” Mr. Quinones remarked. “It was kind of a little taste, I guess, of the religion of the Chinese people, what they believe in.”

He cited in particular the performances “Lady of the Moon,” which tells the story of the goddess Chang’E, and her consumption of a magical elixir, as well as “Monkey King and Dragon Palace,” adapted from a scene in the classic novel “Journey to the West.”

Mr. Quinones said he’d likely be taking “some time, even days, to reflect back” on Shen Yun and “think about and understand the meaning of it.” Just after the performance, though, he said “I feel happiness. I feel pleasant. I feel good.”

Young people, in particular, are likely to get a lot of out Shen Yun, Mr. Quinones continued: “Because we live in a world where it seems hope is being diminished. And we need to have hope.”

He remarked that the spiritual ideas in Shen Yun “get your heart going, get your emotion going, and you feel like you want to get up and do something to make it a better world, you know, for yourself and for the people around you.”