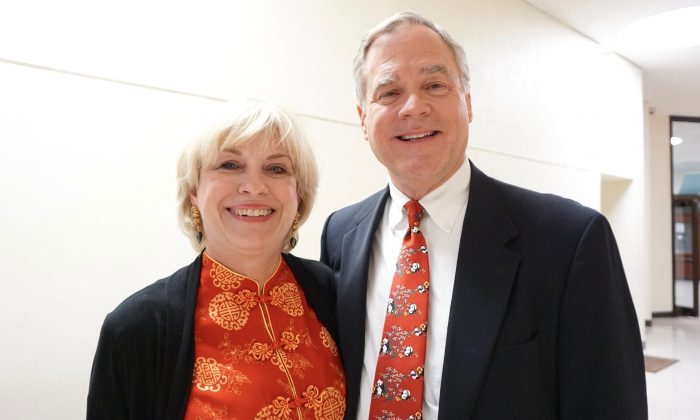 WICHITA, Kan.—Wichita already knows that traditional Chinese culture can inspire its residents. Tucked in the northeast corner of the Botanica Gardens since last year, the Chinese Garden of Friendship demonstrates Chinese gardening, architecture, and art, and it’s meant to inspire the community. Now, for two days only, Wichita residents have the chance to sample traditional Chinese culture in living motion and color on stage. Shen Yun is in town.

On its first night in Wichita, May 3, Marty Miller, director of Botanica, The Wichita Gardens attended the Shen Yun performance at the Century II Performing Arts & Convention Center Concert Hall, with his wife, Cindy. The  couple enthusiastically praised the classical music and dance performance.

“The show is absolutely wonderful—the precision of the dancing, the costumes, and everything. It tells a great story. It’s one of the greatest things I’ve seen,” Mr. Miller said.

“I liked the whole thing,” Mrs. Miller said. “The colors, the costumes and the gracefulness that the dancers had. … This was gorgeous and graceful.”

Classical Chinese dance is known for its grace, difficult tumbling techniques, and the precision and coordination of its group dances.

“It’s excellent. It’s—I couldn’t do it,” Mr. Miller joked. “The precision of all the dancers [is] just absolutely unbelievable. I haven’t seen anything like that.”

Mr. Miller was also captivated by the digitally animated backdrops that seemingly took the actors from the onstage scene into the sky and even to the heavens.

And Mrs. Miller was ecstatic about the Chinese instrumental solo: “I will tell you the lady that played that erhu and the pianist, really, it made me cry. It was, to me, phenomenal and the pianist was just out of this world. Those two [strings], that evoked more emotion for me. … It was like, oh my word, and she is, she is like a virtuoso. She is just phenomenal.”

The erhu, a 4,000-year-old instrument, has an alto range, very near to the range of the human voice. That, in addition to the timbre of the instrument, makes it highly expressive and so emotionally potent. Many listeners cry when they hear its plaintive tones.

Shen Yun Performing Arts, based in New York, brings the depth of traditional Chinese culture to the world. Through story-based dances, the company depicts the rich history of China through legends, tales, and even current events. It also gives insights into the Chinese philosophy of life’s purpose.

“I did a lot of studying when we built the garden and …, to me [Shen Yun] has a deeper meaning. It’s not just a show, because a lot of the culture is so deep and here in America we know very little about the depth of the Chinese culture and this is a good way for people to learn,” Mr. Miller said.

“It’s a great opportunity for us to experience that through music and song, and dance,” he said.