Musical Theater Star and Actress on Shen Yun: ‘The Elegance of the Dancers Is Just Incredible’ 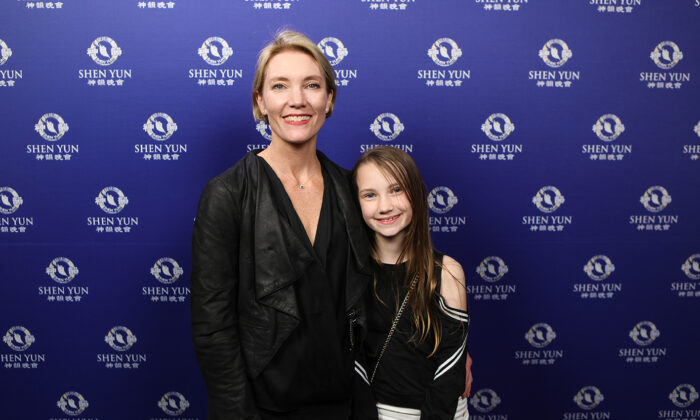 SYDNEY—This musical theater star was amazed when she got her first taste of Shen Yun Performing Arts with her daughter at Sydney’s Capitol Theatre on March 6, 2020.

“It was amazing. Such a pleasure to be here. It was outstanding athleticism and the elegance of the dancers is just incredible,” said Leslie Bell, a musical theater star, actress, dancer, and choreographer.

“They float, and their elegance is just quite beautiful. And the patterns that they make, the costumes … it’s very inspiring. It’s a pleasure to watch it,” she continued.

Bell couldn’t hold back her excitement at the mention of the water dance with the sleeves: “I loved it … it was stunning!”

As a professional dancer and choreographer, her appreciation for the amount of effort that was put in behind the scenes did not go unnoticed.

They’re a very precise company and it feels as though they dance as one. It’s quite stunning.
— Leslie Bell

“I was thinking that as I was watching it because there is such precision in their dancing, and I was thinking that they train eight to 10 hours a day … I can imagine. They’re a very precise company and it feels as though they dance as one. It’s quite stunning,” the dancer said.

There was one thing about the performance that Bell wanted her daughter to know.

“I love the live music. I actually told my daughter, I said ‘look at this incredible orchestra in front of us.’ That was a really lovely surprise,” she said.

The New-York based company’s all-original compositions are delivered with a perfect blend of Western and Chinese instruments—moving the audience with its soul-stirring melodies. The Western orchestra is used to highlight the unique sound of classical Chinese music.

Bell was surprised by the transition from the visual imagery of the ancient times to the modern-day.

“The storytelling was quite amazing, and it was a nice surprise to go from the traditional Chinese costumes to the contemporary. And to see the movements change as well, and the dynamics. The overall vision of what we were watching. It was a nice surprise,” she said.

The dancer said that Shen Yun was a topic that frequently comes up in conversation.

“I’m excited to tell my friends about it. I have a lot of dancer friends in the industry, so the show often comes up in conversation. I don’t know anyone who has seen it before, so I’m excited to go and talk about it.”