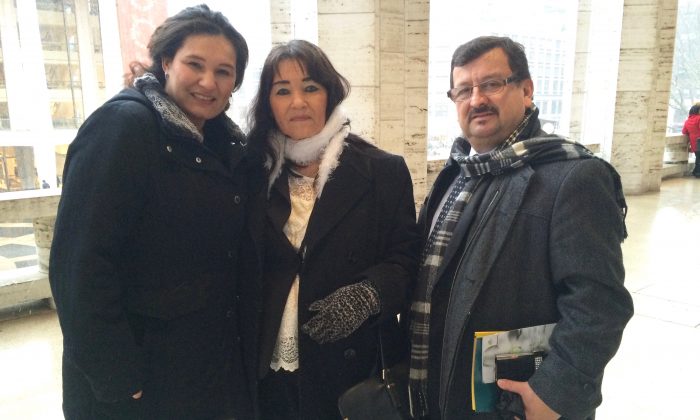 NEW YORK—Adriana Rojas, the owner of Adriana’s Pet Grooming Salon in Bayonne, New Jersey, was excited about seeing Shen Yun Performing Arts at the Lincoln Center. She brought her husband, Luis Rojas, and her mother, Rosalba Quintero, who was visiting them from Columbia, to the sold-out Sunday matinee.

After the performance, all three went out onto the balcony of the theater where they were taking photos with the first New York snow this season. Long and elaborate theater lights lit up the glistening snowflakes that fell directly onto their exposed heads.

Ms. Rojas was at a loss for words about Shen Yun since it was the first time she had seen it. But there on the balcony, she made a solemn vow.

From now on till the rest of all my life, I will come here for this show.
— Adriana Rojas

“I don’t have the words to express it. I’m very excited because this is my first time, but from now on till the rest of all my life, I will come here for this show,” Ms. Rojas said.

Mr. Rojas helped translate Ms. Rojas’s answers from Spanish and was equally astonished. “This is the best show we’ve seen,” he said.

Mr. Rojas, who manages buildings in Summit, New Jersey, said he would also definitely come to see Shen Yun next year. He also hoped that his mother-in-law would be visiting again next year so that they could see Shen Yun as a family again.

“I have never seen anything like it before,” Ms. Quintero said. “It is beautiful, very beautiful. I’m enchanted.”

Shen Yun Performing Arts was established in New York in 2006. The company’s mission is to revive traditional Chinese culture through music and dance while introducing the audience to classical Chinese dance, ethnic and folk dances, as well as traditional Chinese musical instruments.

Audience members always praise Shen Yun for its use of color, the dancers’ athleticism, and the overall presentation of ancient Chinese stories and culture.

“When you are in the theater, you feel peace,” Ms. Rojas said. The performance “takes you in, it carries you. It’s like you fly, and it’s very touching. It made me cry. The history is beautiful. … It’s amazing, perfect! Thank God I’m here,” she said.

“Wow! Wow! Wow!” she exclaimed as she put her hand on her heart and closed her eyes.
“It’s … the most beautiful thing I have seen I’m my life.” Ms. Rojas promised to bring her friends every time she comes back to see Shen Yun. She felt sadness only when the show ended.

After the interview, all three expressed their gratitude and walked to the main lobby. They stopped to take photos with a bright yellow Shen Yun poster and spent another 10 minutes there while the last of the audience trickled out.

As they walked out of the theater, the snow was coming down hard. It covered the entire Lincoln Center Square with a white blanket that shimmered in the early evening light.