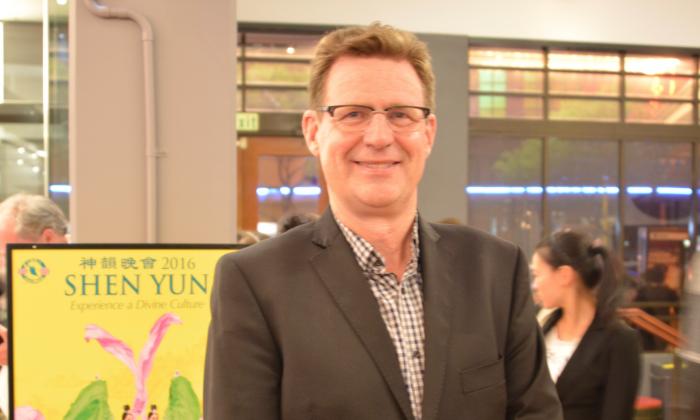 Although Cr. Shierlaw had previously seen Shen Yun, he was taken with the diversity of each performance.

“It’s really spectacular, the costumes are just fantastic, the performers are just so diverse and the athleticism,” he said.

Cr. Shierlaw gained some insight into the ancient culture of China: “There’s a couple of messages. I think the Chinese history and culture goes back thousands and thousands of years—compared with a young country.”

And he was surprised to learn that many modern dance forms or what we consider traditional dances, in fact, come from classical Chinese dance.

This dance form is so expressive that it is ably suited to tell stories, which is how Shen Yun showcases it. These stories tell China’s stories, from it’s legendary beginning through to modern times.

Another aspect that was very evident to Cr. Shierlaw was the suppression that takes place in China.

“Freedom is not something that we should take for granted. We’re too used to it in this country but as shown in a couple of the performances it can be very easily taken away, and it’s something we need to be very aware of.”

He was referring to the couple of pieces that depicted the suppression and persecution of people of faith currently happening in China.

Although Shen Yun travels throughout the world and to date have visited over 100 countries where audiences are in awe of the display of consummate beauty, the company cannot perform in China.

“In this day and age, it’s unthinkable, really, that a show like that can’t be performed in China. Could be performed just about anywhere else in the world without any problem, but it’s incomprehensible that it can’t be shown in China,” he said.

Cr. Shierlaw thinks it is important for the Chinese people to come and watch Shen Yun.

In addition, the spiritual messages resonated with Cr. Shierlaw, which he felt was very powerfully conveyed in the performance.

“Deep down it’s got a very spiritual message: We all descended from heaven, and that there’s a greater being elsewhere.

Shen Yun is “trying to convey that message through the dance and the performances,” he said.

Cr. Shierlaw noted that the performers were very passionate about what they were doing.

“Really the passion—it really does come through very strongly in the performances and the individual dances,” he said.

He said that he would introduce the performance to others by telling them, its’s really something worthwhile even the third time.

The costumes, the dance, the coordination, the elegance, the interaction of the screen to how the performers enter the stage, it’s all fantastic, he said.