‘We were absolutely transported!’ Artist Says of Shen Yun 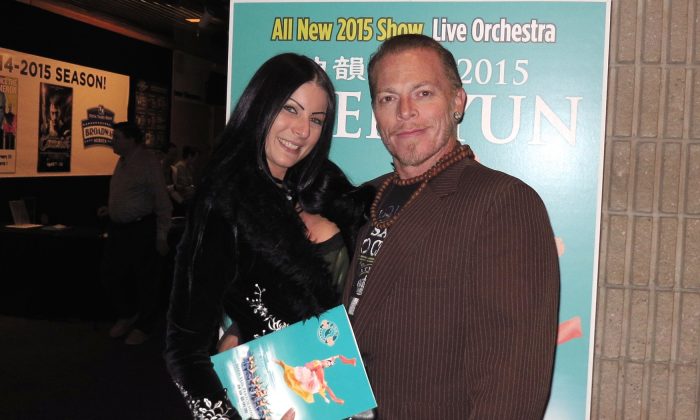 John Schellenberg and Melissa Appling at the Barbara B. Mann Performing Arts Hall on March 30. “We were absolutely transported! It was a magical experience,” Mr. Schellenberg said. (Sally Sun/Epoch Times)

“We were absolutely transported!” Mr. Schellenberg said. “It was a magical experience where something cultural is brought to us that has storytelling like a fairytale. … It just captivated us and took us to some place else. It was absolutely exquisite! Absolutely!”

Mr. Schellenberg and his fiancée, Ms. Appling, own Hayes Studio, Salon, and Gallery, a local business. Tickets to Shen Yun were Ms. Appling’s birthday present for her fiancé. “I knew, my brilliant artist would just absolutely appreciate everything here,” she said.

The performance “took us somewhere else—to another time, a magical place.” “It was just wonderful storytelling!” Mr. Schellenberg said.

“These dances give dramatic portrayal to the cherished stories of past and present. Their figures embody the most exalted virtues of Chinese civilization, and convey a message or moral that is still relevant in our day. Many have inspired people for generations, such as the tales of heroine Mulan and general Yue Fei,” Shen Yun’s website states.

“It was an emotional masterpiece!” Ms. Appling said, and Mr. Schellenberg seconded her feeling.

“First of all,” he explained, “the two-stringed instrument [erhu]—I was moved to tears. [The soloist] started playing that, and I felt that something echoed within me from something beyond me. It was absolutely beautiful. It was gorgeous. Absolutely exquisite.”

“There were times it brought you to tears. There were other times you were just exalted.”

Ms. Appling interjected that the performance was humorous.

“Especially in such a digital age … where all our entertainment is through movies, and sound, and film,” Mr. Schellenberg said.

“This was a true mind-physical-spiritual experience where you’re being elevated with the physical, and the sensory, and you have human beings telling you a story in an ancient fashion, through dance, and sound, and eloquence. The talent was just absolutely breathtaking,” he said.

“Do not miss the opportunity to open yourself to the feelings that Shen Yun can bring you to. It is a truly magical teleportation, if you will. It’s beautiful.”