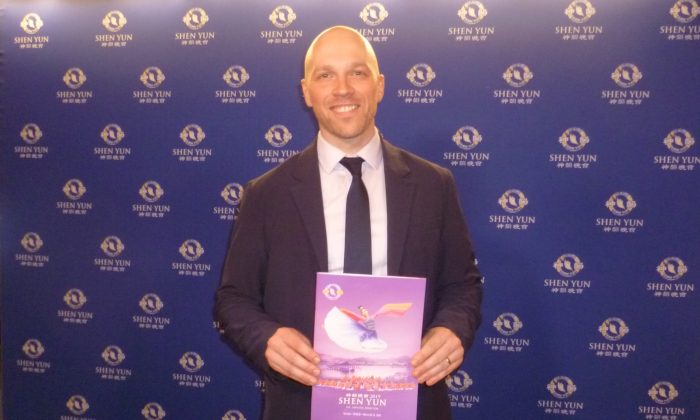 TORONTO–Toronto City Councillor Brad Bradford attended a performance of Shen Yun Performing Arts on March 27, 2019 at the Four Seasons Centre for the Performing Arts. It was his first time seeing the performance and he was impressed.

“I think that the performance is spectacular. The dancers, the music, the orchestra, the tenor– it’s a fantastic production,” he said.

Bradford was happy his city had a chance to welcome Shen Yun.

“Bringing it here to Toronto every year is something that’s very special. Lots of people can come out and learn about the Chinese culture, and also take in a beautiful performance,” he said.

Shen Yun, the world’s premier Chinese dance and music company, has toured hundreds of cities around the globe since its establishment in 2006 in New York, bringing the glory of China’s divinely inspired traditional culture to millions of audience members.

Shen Yun presents performances of classical Chinese dance, an athletic and expressive dance form that has been passed down through the millennia, as well as folk and ethnic dances that celebrate China’s diversity. At the same time Shen Yun features a unique orchestra that combines Chinese and Western instruments, innovative digital backdrops, as well as vocal and instrumental soloists.

“Toronto is one of the most diverse cities in the world, and celebrating different cultures if very important—it’s something that is very Toronto. So having the performance here certainly is something that Toronto wants to celebrate,” said Bradford.

He recommended Shen Yun to everyone.

“If you haven’t had a chance to see it, certainly be sure to pick up a ticket and come on down.”