The Depth of Shen Yun ‘Is Indescribable’ 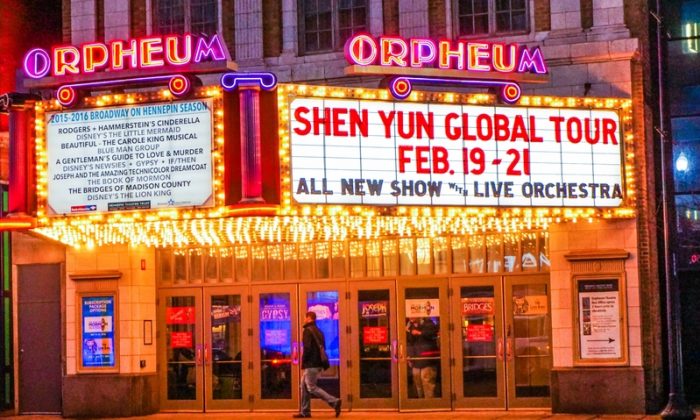 MINNEAPOLIS—Patricia Eriksen didn’t have much to say after seeing Shen Yun Performing Arts but her eyes told the story. The reporter saw a vastness there, a deepening due to the depth of being touched to the core of her being.

“Way beyond my expectations,” was the first thing she uttered to the reporter. “It’s really touched my heart with the spiritual depth of the program.”

She could not use words to describe her feelings: “Just everything—it’s almost beyond words. It’s indescribable trying to explain to somebody: the story, the dance, just the depth that is here.

“I expected to see beautiful dance, I didn’t expect my heart to be touched so deeply by it,” she said.

In her own life, Mrs. Eriksen is used to lofty ambitions and helping to support a dream to achieve the best. Her husband Jack, a bench and control chemist, had dreamed of starting a unique manufacturing method for quality paints which used only superlative materials. Over the years, with Mrs. Eriksen’s help, he did.

I expected to see beautiful dance, I didn’t expect my heart to be touched so deeply by it.
— Patricia Eriksen

It can be said that Shen Yun artists also work tirelessly to put on a superb performance. Every year the company of classical Chinese dancers, orchestra musicians, singers, seamstresses, visual artists, choreographers, and composers, among others, create or learn a whole new program or 20 or so pieces.

No expense is spared—from the programming involved in the digitally animated backdrops to the 400 handmade costumes, to the hours of exhaustive labor in rehearsal.

But Shen Yun, a performing arts company based in New York, goes deeper. In its mission to restore the traditional arts and culture of China, the company brings the authentic spiritual heritage to life as well. The artists practice traditional meditation and try to live by ancient Chinese ideals—truthfulness, compassion, and reverence for the divine, to name some of their principles, according to the company’s website.

Each dance, song, or instrumental piece carries an underlying understanding that the gods and man coexisted once in China, also known as the Celestial Kingdom.

And classical Chinese dance, potentially the most expressive dance system in the world and the focal point for the company, tells stories from China’s past to present.

“The performers are unbelievable in their expression,” Mrs. Ericksen said.

Although Mrs. Ericksen didn’t know if she could verbalize her experience, she did say, “I think it is the spiritual connection that this culture seems to have with the divine. I’m in awe; I can only hope to get to that place before I leave this journey.”