Shen Yun’s Dancers Glide Across the Stage like Liquid Silk 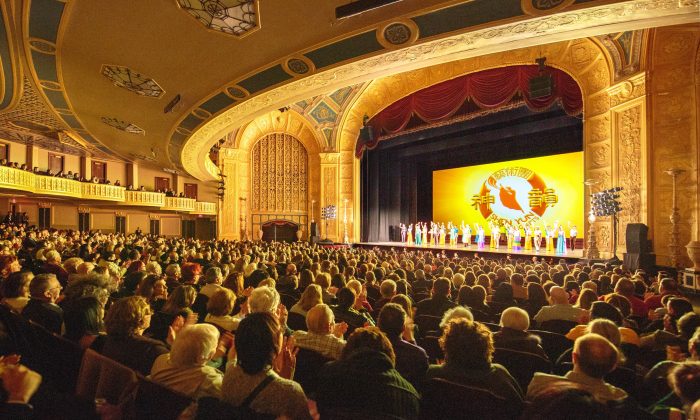 DETROIT—When Danita Binkowski saw Shen Yun Performing Arts Global Company’s matinee performance at the Detroit Opera House, she was amazed by the fluidity of the dancers.

Danita Binkowski saw the performance on March 10 with George Cordray, owner of a windows-covering company in Toledo, Ohio, where she works as well.

“They [the dancers] must train all the time, they must’ve spent their whole life training. It’s just amazing—wonderful,” Mr. Cordray said of the performance.

Ms. Binkowski loved the performance. Her overall impression was that it was great.

She also commented on how beautiful the costumes were.

“I loved them and I’ve been watching all the different ways that they can use all the different sleeves, and the flowing of all the silky costumes and the many changes they all go through, it’s very impressive.”

“It’s very interesting that this kind of a show can’t be seen in China,” Ms. Binkowski added.

Many in the audience are surprised to learn that the Chinese Communist Party does not allow Shen Yun to perform.

According to the Shen Yun website, “Over its past 60 years of rule, the communist regime has treated traditional Chinese values−centered on the idea of harmony between heaven and earth−as a threat to its existence. And in its systematic campaigns like the Cultural Revolution, it has uprooted traditional beliefs and destroyed ancient treasures−bringing traditional 5,000 years of civilization to the brink of extinction.”

As a result, performances like Shen Yun cannot be shown there for the time being.

Ms. Binkowski said, “I was surprised and yet I’m glad that they’re bringing that out so that it brings more awareness here of what things are still like over there, that they have this great culture over there and yet they can’t celebrate it like we can see it here.”