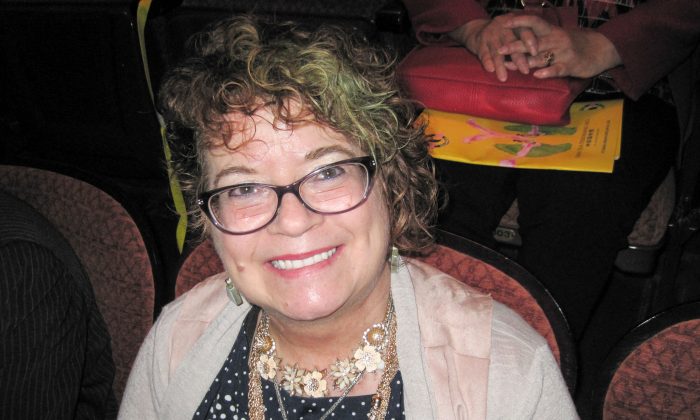 Patricia Zukowski greatly admired the courage of Shen Yun Performing Arts performers at the Benedum Center for the Performing Arts in Pittsburgh on May 10, 2016. (Tony Dang/Epoch Times)

PITTSBURGH—Patricia Zukowski, an artist and journalist, greatly admired the courage of Shen Yun Performing Arts performers. The statement the dances made, the sacrifice that comes with living by a moral code, the sacrifice of the artists to share their beliefs, all of these impressed her tremendously.

Shen Yun formed in New York in 2006 by artists from across the globe in an attempt to salvage China’s traditional culture. It has been systematically dismantled by the communists and their atheist regime.

Not only do the dances support and show a traditional culture infused with the spirituality of Buddhism, Taoism, and Confucianism, they also depict the ongoing repression of people of faith in China.

“The stories are very powerful, very spiritual,” Ms. Zukowski said on May 10, at The Benedum Center for the Performing Arts.

Ms. Zukowski found it particularly brave that the performers were making such bold statements, because, she said, “I’m sure there are repercussions. People have families [in China], and I find that courageous and something that I admire greatly,” she said.

Impressed, as well, by the very strong belief in a higher power and principles that, when followed, lead to the afterlife, she said, “I have a great respect for people who live their lives according to a moral code. It gets across.”

The spiritual ideals in the dances manifest in stories with themes like loyalty, kindness, and reverence for the divine. The first dance demonstrates how the Creator brought deities to earth to reincarnate in China. The last dance looks at the ancient belief that by becoming good, we will one day find our way back to heaven.

Holding to these beliefs “always comes with sacrifice. It’s going against the grain of the world,” Ms. Zukowski said.

So many people in the world today are being repressed, she said, and are unable to worship as they choose, so this theme is very relevant. Freedom of worship is at the root of America, “so the fact that people today can’t practice their faith, it’s a shame, and I totally support their right to be able to exercise their faith.”

Mary Kerston, a retired administrative assistant, who attended with her husband, Mike, felt the themes in Shen Yun were relevant, too.

For her, the spirituality reflected people’s desire today to escape the turmoil in society and return to “to their more spiritual selves. And I think it kind of reflects that. … I think we’re all trying to go back in history and bring that time back—a … simpler time.”

The spiritual themes were relevant for the entire world, Ms. Zukowski said, unless “you live in a box.”