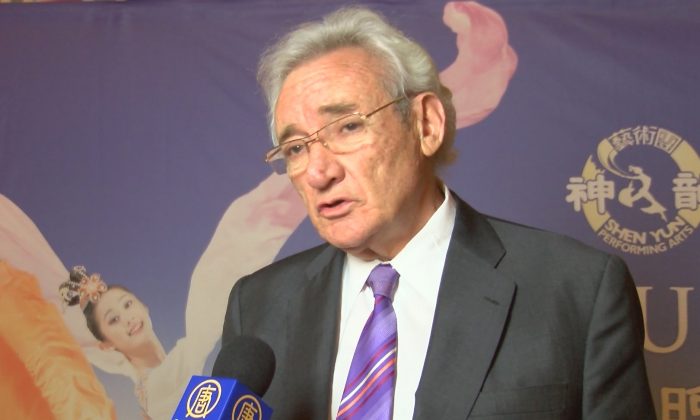 BARCELONA, Spain—Wednesday night was an important night for soccer fans in Barcelona, as their home team of Barcelona was playing against Atlético Madrid in the quarterfinals of the UEFA Champions League.

Despite this, Spain’s iconic radio personality Luis del Olmo said those who instead of watching the game chose to come and see Shen Yun Performing Arts perform live at the National Theatre of Catalonia will never regret their choice.

“From the first moment I heard about the performance at the National Theatre of Catalonia—which I congratulate for bringing Shen Yun—I had no doubt that we have never seen a show like this before,” Mr. del Olmo said after watching Shen Yun’s opening performance on Wednesday.

“Having watched many shows, I undoubtedly think this Shen Yun show is the most important one I’ve ever watched in my life. I wholeheartedly congratulate them,” he said.

Through a series dance and music performances, each lasting less than 10 minutes, “Shen Yun brings to life China’s ancient myths, bygone heroes, and celestial paradises. Based in New York, the company was formed by a group of leading classical Chinese artists to revive China’s divinely inspired culture, which has been uprooted by decades of communist rule in China,” according to Shen Yun’s website.

Shen Yun’s performances, which are well received in hundreds of venues around the world each year, cannot be seen in China which lacks artistic freedom under the Chinese Communist Party (CCP).

The CCP, in fact, also attempts to interfere with performances of Shen Yun as the renowned performing arts company visits different cities around the world.

After unsuccessfully trying to interfere with the shows in Brussels held earlier this month, CCP officials tried to prevent Shen Yun from performing at Barcelona. However, their efforts to pressure the theater hosting Shen Yun and the Spanish foreign ministry failed, and Shen Yun took the stage once again to dazzle audiences with its presentation of classical Chinese dance and music.

Commenting on CCP’s attempts to stop Shen Yun, Mr. del Olmo said, “What we have just understood, how the Chinese government is against this show, this [Shen Yun] is a page in the grandeur of Chinese history, Chinese art, and the Chinese power.”

Shen Yun stands out from other performances “because of the soul of the dancers and the performers and the whole ensemble, for the show itself, which through visual effects, through the voices of the tenors, and through the overall environment, make this one [performance] a page that will be long remembered here in Barcelona.”

Mr. del Olmo’s fascination with Shen Yun began from the very first scene, when the curtain rose to a scene of utmost beauty.

“I came with my wife, and she said, ‘I don’t know how to describe this to my sons and grandsons.’ It’s something never seen before, it’s a unique show,” he said. “There have been many wonderful moments.”

Beside the masterfully choreographed dances, which are mostly classical Chinese dance, along with a few ethnic dances, Mr. del Olmo was highly impressed by the Shen Yun Orchestra which plays original scores accompanying the dances.

Commenting on the orchestra, Mr. del Olmo said, “I think that there’s a combination between the professors, they are all professors, and the conductor is in charge of conducting some genuine prophets and some genuine masters in each of the instruments. They go hand in hand with the wonders of the whole show.”

Shen Yun, Mr. del Olmo said, is truly a performance not to be missed.

“Don’t miss this show, because it is one in a million, otherwise the Catalonians will regret it, as there are only two days left in the National Theatre of Catalonia,” Mr. del Olmo stressed to those who have not yet seen the performance.

“I loved it. My congratulations to the whole Shen Yun company and to all the audience members who came today to the great theatre of Barcelona.”