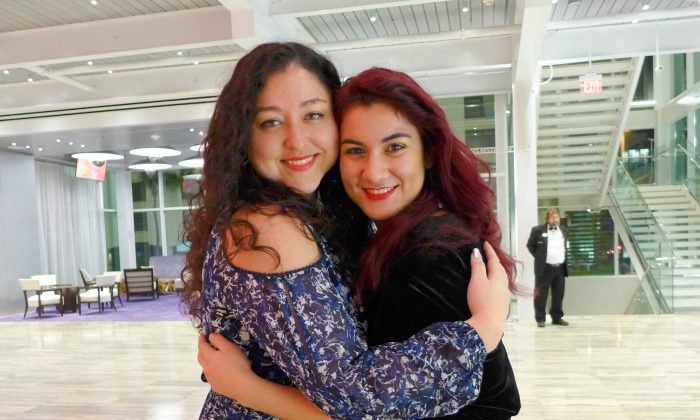 ORLANDO, Fla.—Carolina Gutierrez had been waiting four years to see Shen Yun Performing Arts, and when she finally made it, she felt it was an awakening.

Gutierrez attended the performance with her friend Carolina Rivera, a real estate manager, at the Dr. Phillips Center for the Performing Arts on March 13.

“They look like they are flying,” Rivera said, describing the dancers’ movements and the flow of the fabric as they employed props or used their elaborate costumes in a prop-like fashion. “It was just beautiful. I really felt like I was somewhere else, I really liked it.”

It is Shen Yun’s mission to take audiences on a journey through 5,000 years of Chinese civilization, and with the innovative backdrops and artfully designed programs, many indeed feel transported to a bygone China.

The music added to this effect as well, Rivera said.

“I love how tranquil it is, idyllic and charming, and pretty at the same time, and [with] personality,” she said. “So I’ve enjoyed every aspect of it.”

And perhaps most meaningful was seeing the manifestation of faith in the traditional Chinese culture. China’s culture is said to be divinely inspired, with everything from the language to the dynasties to the traditional dress something imparted to man by the heavens.

“The spiritual part really reminded me of my own spirituality,” Rivera said, “because God is always wanting us to be good, and no matter how much darkness, there is healing.”

Themes like divine retribution, justice over evil, and compassion are found in Shen Yun’s stories, as are glimpses of the divine.

“I loved how it showed that healing aspect, because that healing lies inside us,” Rivera said. “We have that power to just believe in good, and we can heal whatever we need healing, so it’s kind of beautiful to just see that portrayed.”

Rivera brought up several stories where she saw the characters choose goodness, and keep hope alive, and how God came into their lives in their moment of need.

“Good wins over evil. Love conquers all,” Rivera said. She also saw themes of rebirth and resurrection. “We always think that when people pass away they are gone and they are in the afterlife, but their spirits are always with us, and they are able to become alive again. … Their love carries on throughout this world.”