Shen Yun Music ‘Speaks to Your Inner Self,’ Pianist Says 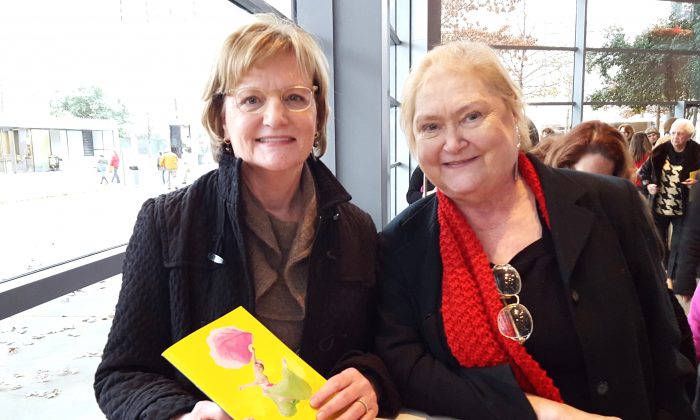 DALLAS—Pianist Lynn MacMillan came to see Shen Yun Performing Arts with an ear for Eastern sounds. Having played Japanese music and studied world music for many years, the erhu solo and uniquely arranged orchestra of New York-based Shen Yun were a delight.

You could hear the healing in it.
— Lynn MacMillan

“You could hear the healing in it,” Ms. MacMillan said of the music, at the Winspear Opera House in Dallas on Jan. 9. She and Debbie Key had attended the performance as a gift from a dear friend.

As the Shen Yun masters of ceremony explained, the ancient Chinese people believed music had the power to heal. The five internal organs of health, the five senses, and the five notes of the pentatonic scale were all connected.

The philosophy was especially resonant during Sun Lu’s erhu solo, for Ms. MacMillan. The erhu is a Chinese instrument that dates back about 4,000 years. Though it only has two-strings, it has a wide range of sound and is known for its expressive quality.

“It sounded like a human voice speaking to you … I was just blown away by it,” Ms. MacMillan said. “It spoke to your inner self.”

“I could see that listening to that could take the tension away from you, and let you float on the sea of peace. It was just exquisite,” Ms. MacMillan said.

Ms. Key and Ms. MacMillan also commented on the expressiveness of Shen Yun’s orchestra. Ancient Chinese instruments like the erhu and the pipa, a Chinese lute, and percussion are brought seamlessly into a Western orchestra.

Ms. MacMillan noted that though the foundation of the orchestra is mainly Western instruments—the familiar violins and trumpets—the instrumentation and composition evoked something clearly Chinese. The Western instruments were effectively used to mimic Chinese music and sound, she said.

For example, in a court dance set in the Sui Dynasty, the oboe was used in a melody that sounded so authentic, she noted. In the music, “you can hear what the court music sounded like centuries ago.”

There were also aspects, Ms. Key noted, that sounded distinctly Western when the story called for it, almost like an American march.

Though much of it was foreign, Ms. Key said the themes she saw in the performance were universal.

“I think it was acknowledging the suffering in the world and the redemption … good and mercy … the struggle between good and evil,” she said. “It was uplifting.”

Ms. MacMillan said she saw the most universal of themes: belief in the Creator.

It surprised and impressed her, since China today is mostly thought of as being non-religious, she said. Today’s China, after 60-some years of communist rule, lacks the traditional Chinese culture Shen Yun is seeking to revive. The communist regime, officially atheist, has launched campaigns like the Cultural Revolution to destroy the traditional culture, values, and arts.

Being based in New York, Shen Yun is able to present these classic Chinese themes and values—and in traditional Chinese culture, Ms. MacMillan saw, these spiritual themes are prominent. “That surprised and impressed me,” she said. “I thought it was just wonderful, it was just beautiful. When you look at the gray world out there, and you saw the color and synchronization [here] … just gorgeous.”