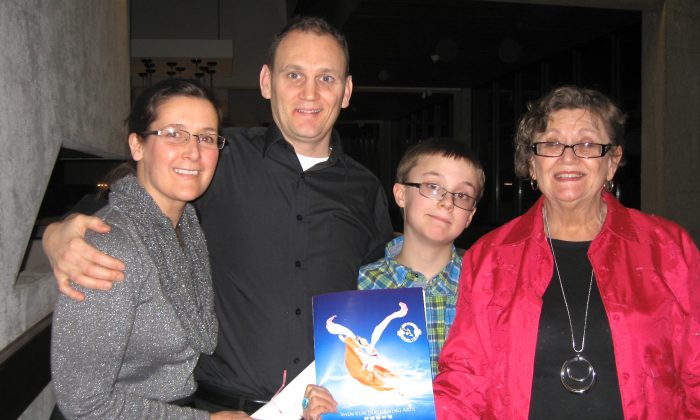 Canadian illustrator Nick Craine brought his wife, son, and mother to enjoy an evening at Shen Yun Performing Arts at Centre in the Square on Jan. 15, 2014. (Allen Zhou/Epoch Times)

A resident of Guelph, Mr. Craine’s illustrations have graced book covers, magazines and comics around the world. His work has appeared in The Atlantic Monthly, The New York Times, The Washington Post and The New Republic, and in 2008 he has been included in Illustration Now, an anthology sampling 150 of the world’s best illustrators.

From the handmade costumes to the digital backdrop, Shen Yun has been described as a feast for the eyes. As a graphic artist, Mr. Craine was quick to comment on its visual appeal.

“It cools the spirit,” said his mother Sylvia.

The world’s premier classical Chinese dance and music company, Shen Yun been known for its visually stunning productions with colour and patterns used extensively to give audiences a taste of traditional Chinese culture, believed to have been divinely inspired.

Shen Yun also incorporates a digital backdrop displayed behind the dancers that portrays ancient Chinese landscapes and scenery representative of China’s many dynasties. The backdrop gives context to the dances and also interacts with the performers, adding a unique dimension to the stories.

Classical Chinese dance is one of the most comprehensive dance forms in the world and its techniques are also one of the most difficult to execute. Shen Yun’s dancers are extensively trained in this rigorous discipline and their efforts become apparent on stage in their ability to move in unison and harmony, even as part of a large ensemble.

“They are actually so perfect,” said Mr. Craine. “Everyone is so synchronized.”