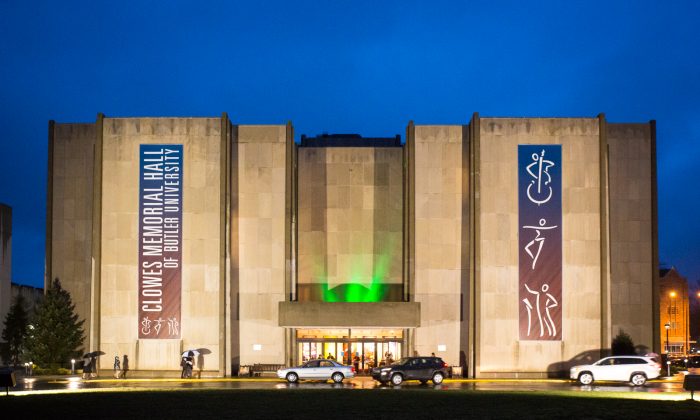 INDIANAPOLIS—Seventeen cities in the Midwest were among the some 100 scheduled stops for the 2016 Shen Yun Performing Arts global tour. Indianapolis was the 11th Midwest City to witness 5,000 years of divinely inspired culture brought to life through an infusion of traditional Chinese arts and modern technology. Several theatergoers who attended the March 9 performance at Clowes Memorial Hall of Butler University expressed gratitude to Shen Yun for coming to Indianapolis.

Among them were City of Noblesville Mayor John Ditslear and his wife, Teri, a pastor with Roots of Life Community Church. Noblesville is 40 miles north of Indianapolis.

“It is wonderful. It is so spiritual, it is lovely, lovely,” said Mrs. Ditslear.

“I appreciate the talent and the beauty and, of course, the colors are just magnificent. So, we really are enjoying it, said Mr. Ditslear. His wife chimed in, “Inspirational.”

She explained her remark: “The creation story, the power within us, the compassion, the beauty—it is just beautiful. Thank you!”

The Shen Yun performance begins with the creation story and continues from the Han Dynasty to the present. The stage comes alive with legends, famous characters, and tales of courage told through classical Chinese dance, stunning costumes, and sets.

To enhance the expressive nature of classic Chinese dance are the sounds of traditional Eastern instruments used among a live Western orchestra, and a different digital backdrop for each story. The backdrops take the audience to various magical lands and other dimensions.

Good Educational Experience for Everyone

“I really like it. … I like the colors and the dancing,” Mikayla said. Favorite dance stories for her included the “‘Monkey King,” a comic adventure, and the “Handkerchiefs”, where the dancers spin pink handkerchiefs symbolizing plum blossoms and the arrival of spring.

Ms. Hillebrand, a vice president at a local JPMorgan Chase bank, explained, “We liked the whole program, the music, and the colors.” And, she found Shen Yun to be a good educational experience for everyone.

She said she understood a dance about the persecution of people of faith by the communist regime. “I thought that was a good history lesson to be able to teach her,” Ms. Hillebrand said.

“Because I don’t think, maybe, it is widely known or understood. It is important for people to understand that those freedoms aren’t widely available everywhere,” she explained.

The traditional culture was almost completely destroyed by communism and its indoctrination of its citizen to atheism. Traditional ways are deeply spiritual; thus, traditional practices, such as Falun Dafa, a traditional meditation practice, are persecuted.

Shen Yun was formed outside of China in 2006 to revive this ancient heritage, and to have the freedom to do so.

Very Touching to the Heart

Mr. Justin Hollingsworth, vice president of operations and chief information officer for Saber Management, also found Shen Yun to be enlightening for himself, his family, and others.

“I love the show. It is very colorful,” Mr. Hollingsworth said.

“I think it is very enlightening for the American people to see something that actually is happening inside of China—some of the the ways people are treated inside of China, not being able to practice their own religions, persecution.”

During the performance, Mr. Hollingsworth said he “wondered how his children would feel seeing this for the first time.”

“It is giving my children a different experience, something that they have never done before, that’s the important part for me,” he said.

He was also moved “to see these ladies and gentlemen dancing. The movement that they have is just very soft, very purposeful. I think it is very touching to the heart. You can see their passion in their dance.”

I love the show coming to Indianapolis.
— Justin Hollingsworth

“I appreciate being here. I love the show coming to Indianapolis. It is great for the city, and I thank [Shen Yun],” he concluded.