Shen Yun Is ‘Creative and Beautiful,’ and More Than Entertainment 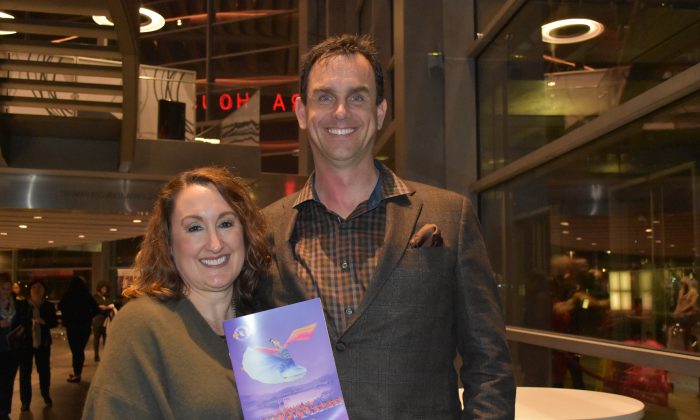 DALLAS—Suzanne and Dallas Branch are both architects. They came to watch Shen Yun Performing Arts 13th season production on Jan. 22, in Texas. The growing arts company, now with six touring groups, creates a new production every year, and brings 5,000 years of traditional Chinese culture to the stage at every performance.

“I loved it,” said Suzanne Branch. “It was so creative and beautiful. Very emotional and it’s amazing that they recreate it every year. That’s very impressive.”

Dallas Branch was struck by the vibrancy he saw onstage and the set itself.

“The costume was just incredible, so vibrant. Amazing show,” he said.

Mrs. Branch added to that her impression of what she heard.

“The music was incredible,” she said. “I loved the blending of the Chinese traditional instruments with the Western instruments. That was so creative.

And introducing each story and piece are Shen Yun Performing Arts’s emcees, who take the stage before each vignette. Mrs. Branch appreciated them very much.

“I thought it was very good,” she said. “It was very educational. I loved the emcees that came out to kind of guide you through the process. I thought that was wonderful and kind of gave some context to all the performances.”

A story that left a strong impression upon her was “Lost in a Painting” which shows a woman captivated by a classical Chinese painting of scholars gathered around an incomplete poem. Immersed in the feeling of the painting, the woman is struck by inspiration for the last line of the poem.

Besides portraying the traditional Chinese culture through classical Chinese dance accompanied by orchestra, each of Shen Yun’s six touring groups have their own unique solo performers. In Dallas, the couple enjoyed musical performances by a soprano and bass singer.

“She was fantastic,” said Mr. Branch.

“They were both very powerful,” said Mrs. Branch. “The soprano, you can feel it.”

The couple also appreciated the translation of the songs upon the background screen.

Mrs. Branch said, “I felt it was great. It was good to have that as kind of a guide to understand how they were putting their emotion into their words and their song. That was wonderful.”

“I would love to come back next year and to see a new show,” said Mrs. Branch.

Keith Powell is a publisher, and his wife Staci Powell is a flight attendant. They both enjoyed watching Shen Yun.

Keith Powell said, “I like it, I’m liking it very much. Very entertaining, and the athletic ability of these dancers are incredible.”

Staci Powell said, “I feel the same way. It’s very colorful and enlightening, and interesting to know that there’s background to it, and not just entertainment.”

Mr. Powell said, “I think just the overall artistry I’m seeing is just incredible and the dancers are phenomenal, the colors are incredible. I like the way they’ve tied in the imagery in the background, you know how they kind of go in and out of the screen, it’s really creative how they’ve done that. Very enjoyable.”

He also enjoyed the music.

Mr. Powell said the music had an effect on him.

“Very peaceful, very peaceful, and I sense a little bit of meditation as far as that goes. But yeah, I think that it’s very soothing.”

Mr. Powell said the spiritual nature of the show is “spot on.” Traditional Chinese culture is said to be divinely inspired, and such references were evident in the production.

Mrs. Powell said that she would like to understand more about spiritual oppression in China, which was touched on in stories of China set in the modern day, and she said that it had relevancy to them. Mr. Powell agreed.

“I hate to see anyone feel persecution,” he said. “We are all about freedom, freedom of religion, freedom of speech, and I feel like that’s a very important value that we have as Americans.