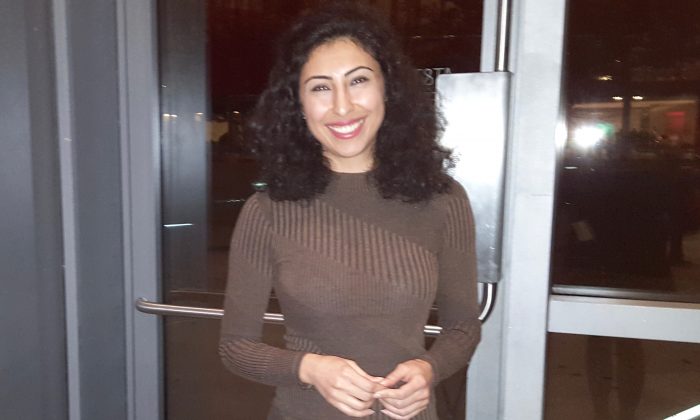 Parisa Soultani thought attends Shen Yun Performing Arts at the Winspear Opera House, Dallas, on Jan.7, 2016. She was touched by "the way the feminine aspect is presented."

DALLAS—The first thing Parisa Soultani thought was that it was breathtaking. But what gave Shen Yun Performing Arts such gravitas and importance was the mission behind it, and its role as the voice of a nearly lost China.

“I really love it as art, but I think what’s more important is what it’s pointing out and trying to say about China—its art and history, and also its own spirituality,” Ms. Soultani said during intermission at the Winspear Opera House on Jan. 7.

Especially since that culture has been suppressed in its own country.

“I think many Americans are not very aware of what happened to the Chinese people during and after the Cultural Revolution and since,” Ms. Soultani said.

She saw, via the ancient art form of classical Chinese dance, that China was once a land where humans and the divine coexisted, and its culture was divinely imparted. But since the communist regime took power 60-some years ago, it has systematically tried to destroy these traditional beliefs, values, and arts.

“The truth is that, as we see in Shen Yun, 5,000 years of amazing history and wisdom and traditions are basically repressed and they’re repressed every day,” Ms. Soultani said.

It is a matter Ms. Soultani deeply cares about. As co-host of Link TV’s “Bridge to Iran” series, she is passionate about using media to tell stories of cultures, unveiling little known aspects with authenticity. Her recent project “One Through Love” comes from a rich part of the Iranian culture and delivers a message of a higher essence that connects all people.

That culture she saw onstage depicted wisdom and grace.

One aspect she found particularly touching was “the way the feminine aspect is presented.”

From refined, imperial court dancers with “water sleeves” to celestial fairies, audience members are often captivated by the spirit of the female dancers expressed through classical Chinese dance.

“It’s very touching, it connected with me as a woman, from a very deep place; a reminder of the beauty and the grace that some of our wisdom and traditions held for the feminine that perhaps is lost,” Ms. Soultani said.

They are able to express these values and these arts, and to me that is the most important part.
— Parisa Soultani