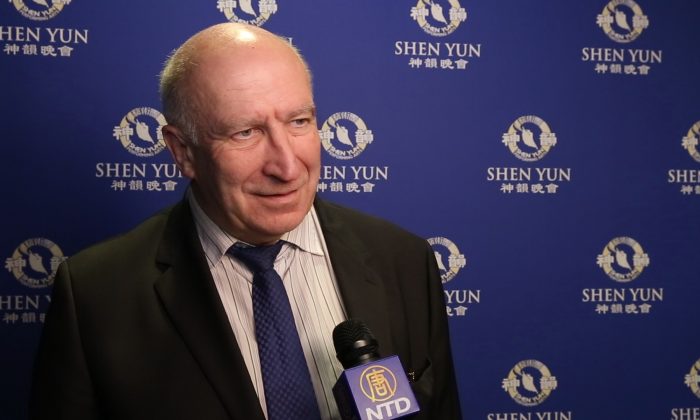 The New York-based classical Chinese dance and music company opened the first of its two performances in the northern French city to thunderous applause.

Denis Lamy, producer and director of an intercultural association, found it hard to find words to describe the beauty of Shen Yun. “I’m stunned. … It is very difficult to find words to express what we feel,” Mr. Lamy said.

“There’s a purity that emanates from each dance, which is highlighted with moral values …. It is wonderful. The choreography is really perfect. It’s hard to imagine it could get any better.”

Shen Yun presents the essence of 5,000 years of traditional Chinese culture. Through dances, music, and vocals, it weaves a wondrous tapestry of heavenly realms, ancient legends, and modern heroic tales with deep principles. These principles and morals values originate from Confucianism, Buddhism and Taoism.

“We live in an increasingly individualistic world, and these values are getting lost … however this show highlights them all along. It is very powerful,” Mr. Lamy said.

What really stood out for him in the performance was the feeling of peace one feels after taking in a Shen Yun performance.

“I really feel the peace that takes over our hearts, our minds, with the music, with dancing, with art,” said Mr. Van de Velde, who has conducted many orchestras around the world throughout his long career.

“I think wherever Shen Yun will go, it will bring something positive.” It will also give the opportunity to “people to calm down a little bit,” he added.

Her daughter, Emilie, was also very moved by the performance. “I still have my head in the stars and my heart in China. It was beautiful,” she said.

Established in 2006, Shen Yun has a mission to revive China’s divinely-inspired culture that has been all but destroyed under decades of communist rule.

“It’s quite inspiring to experience Eastern music. It’s refreshing. Moreover, it is also interesting to experience lyrical songs from another culture,” Mr. Zielinski said, referring to the vocal performances by Shen Yun’s award-winning vocalists who sing Chinese lyrics in the bel canto style.

Lord Oliver, another ocalist and composer, said the music of the orchestra is “really beautiful.” “It’s really incredible. Quite magical,” he said about Shen Yun. “Indeed it is very touching to see a show like this.”