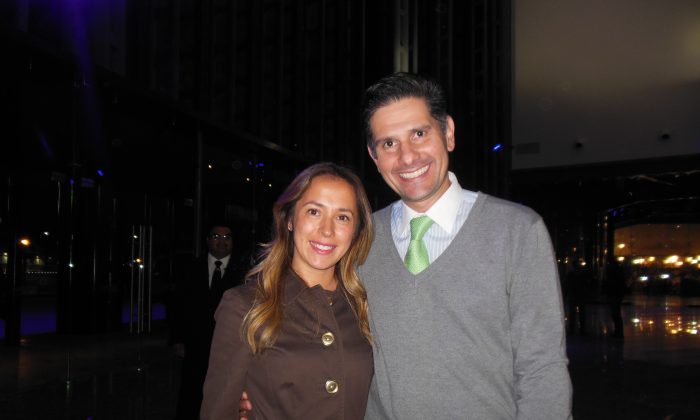 Jerry García and his wife Leslie Ortiz at the Shen Yun performance at the Metropolitan Auditorium in Puebla, Mexico on March 1, 2016. (Sherry Dong/Epoch Times)

PUEBLA, Mexico—For one night only, Shen Yun Performing Arts took residents of the central south Mexican city of Puebla on a journey through China’s 5,000 years of history and culture.

Puebla is one of Mexico’s most populous cities, and attracts many students from all over the country to its prestigious universities. Thanks to its history and architectural styles, the city was named a UNESCO World Heritage Site in 1987.

Among the audience members amazed by Shen Yun’s performance in Puebla’s Metropolitan Auditorium on March 1 were Jerry García, CEO of Pintumex, a major paint manufacturer with operations all over Mexico, and his wife Leslie Ortiz, a lawyer.

“It was a really, really nice experience. I never had this experience with a culture. And the dance, the dresses, were amazing,” said Mr. García.

The waves, the colors, the music, it kind of makes me feel free, a free spirit.
— Jerry García

Shen Yun, a New York-based classical Chinese dance and music company, travels the world each year with completely new programming consisting of story-based dances and  ethnic and folk dances accompanied by a live orchestra, as well as solo performances by award-winning vocalists and instrumentalists.

The cultural performance, which aims to revive China’s divinely inspired culture, often gives an uplifting feeling to audiences who are mesmerized by the beauty in Shen Yun.

“The waves, the colors, the music, it kind of makes me feel free, a free spirit,” Mr. García said.

“Spiritual, very humane, and kind,” he said about Shen Yun. “At the end … there’s a balance between good and evil.”

Shen Yun showcases values and principles from China’s ancient culture, such as benevolence and justice, propriety and wisdom, and divine retribution.

It was this depth in the performance that also captivated Ms. Ortiz.

“They produce a kind of energy that cannot be seen in any other show,” Ms. Ortiz said.

“Everything is in place to inspire you, and it makes you connect with your soul. I felt that my soul was stirred,” she added.

“The way they move, their hands and their head, it was like a sea, it’s peaceful.”

She added that she enjoyed seeing the relationship between heaven and earth depicted in the performance, and how there was a balance.

“They have to fight to get that balance, and that’s the fight we have everyday as people on this Earth,” she added.

“[I feel] happiness, a spark in my soul, and I want to learn to dance and want to make myself a costume like those!”