Shen Yun Connects Us to Everything, Music Teacher Says 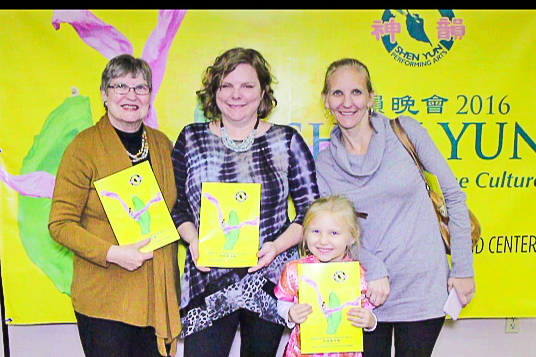 LAKELAND, Fla.—It was while music teacher Barri Lester was studying Chinese medicine and looking to the philosophies of the past that she came across Shen Yun Performing Arts.

Both sound and color could influence health and emotions, she knew. The ancient Chinese believed music had the power to heal. Even the characters for the words “music” and “medicine” are related. Chinese scholars had discovered a relationship between the musical pentatonic scale, the five elements, the five internal organs of health, and five sensory organs.

And the beautiful Shen Yun brochure she found seemed to combine it all.

“I just felt like it was this beautiful culmination of all the things I’d studied and felt passionate about,” Ms. Lester said.

Now, months later and having seen New York-based Shen Yun at The Lakeland Center on Jan. 5, Ms. Lester said it gave her a feeling of being whole and connected.

Seeing the sound and the color and the deep, spiritual culture all come together, tears came to her eyes. We respond instantly—too immediately for thoughts—when it comes to sound and color, Ms. Lester explained. In that moment, when the curtain first rose, she only felt alive. “Very alive, and very hungry for more.”

It can’t help but to open your heart.
— Barri Lester

When all of this comes together, “it can’t help but to open your heart,” she said.

Formed in 2006, Shen Yun artists aspire to revive traditional Chinese culture. The 5,000 years of culture is divinely inspired, and rooted in beliefs like benevolence, justice, wisdom and propriety, and respect for the heavens, according to Shen Yun’s website.

These ancient beliefs that go back beyond the China of today under communist rule, Ms. Lester said, is what Shen Yun is rooted in, and what made the performance so touching.

“I felt really excited that it’s rooted in an ancient culture and these beliefs of long ago, and I was glad to see it alive and on the stage. It was very special,” Ms. Lester said.

“It’s beyond phenomenal,” Ms. Lester said in summary. “In less than two hours, [Shen Yun] connects you to all the structures of the universe, to sound, to the stars, to our planet, to our own spirit and light.”