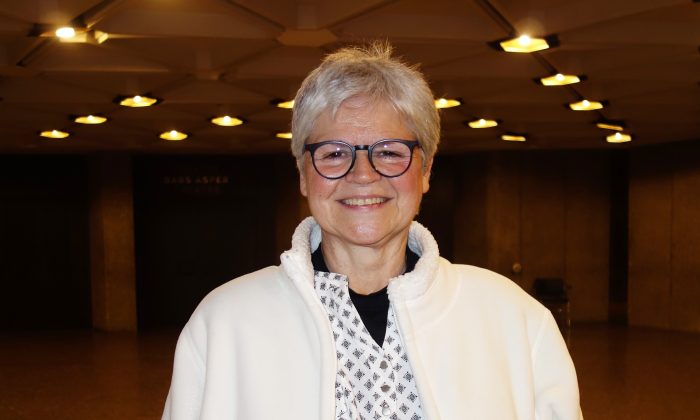 “I am deeply, deeply touched by the high values, the integrity,” Aveline said after seeing Shen Yun Performing Arts at the National Arts Centre in Ottawa, Canada, on Dec. 29.

Aveline teaches interpersonal relationships at the University of Quebec, and has decades of experience in the performing arts. She spent 20 years as an actor, contralto singer, director, creative educator, and trainer; much of those touring across Europe, United States, and Canada.

So she was familiar with what it took for the Shen Yun performers to be doing what they were on stage.

New York-based Shen Yun indeed travels the globe every season. The company was formed in 2006 by artists who wished to share the real traditional Chinese culture with the world, a 5,000-year-old legacy that was lost in the past century when communism took power in China and sought to eradicate the traditional culture.

Traditional Chinese culture is indeed spiritual. According to Shen Yun’s website, people for 5,000 years lived by the guiding principle of harmony between heaven, man, and earth. Society was guided by values from the religions of Buddhism, Taoism, and Confucianism, such as benevolence and justice, wisdom and propriety, and good begetting good.

And Aveline was stunned at how this spiritual culture shone through the music and authentic classical Chinese dance. Moved by the performance, she read through the program and learned that most of the artists in Shen Yun practice Falun Dafa themselves. Falun Dafa, or Falun Gong, is a spiritual practice that teaches the three principles of truthfulness, compassion, and tolerance.

According to the program book, the artists seek to elevate their own minds and morality, so that they can give the audience, through their art, something that is truly good.

It’s easy to merely say art is spiritual, and relate the history of a certain dance or story.

“[They] honor the philosophy and the healthy, high, high values they speak about,” Aveline said.

Learning about Shen Yun’s philosophy, and Falun Dafa, Aveline felt these were values she’d learned and taught over the last four decades as well. And to see that Shen Yun was sharing this with the world was inspiring.

“This is amazing because rarely people have so much integrity,” she said. “That’s why this company can help to change the world tremendously. This is fabulous!”

Reading the program alone is a moving experience, Aveline said, and then watching the artists move only further deepens that experience. Then, learning about Falun Dafa, Aveline said she was triply moved, perhaps to even take up the practice herself.

She had one message for Shen Yun: “Oh my goodness, your impact is amazing!”

With reporting by Grace Dai and Catherine Yang.