Production Designer: ‘It has a lot of heart to it’ 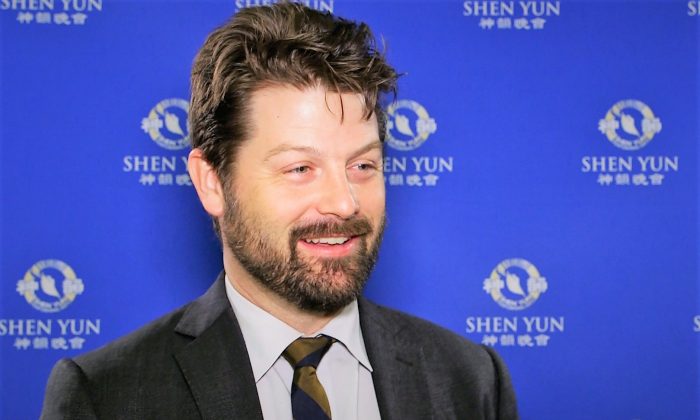 Michael Barton, a production designer for film and television who designs and build sets, and his son enjoyed the Shen Yun evening performance at The Soraya (formerly Valley Performing Arts Center) in Northridge, Calif., on April 25, 2018. (Courtesy NTD Television)

“The classical Chinese dance was very cool. I was with my son tonight, and he’s four and a half, and he loved it. I thought it was a really great first introduction to theater. It was good to bring him to this, because it wasn’t too much at once, and it was very family friendly, and he was amazed by it. I was really happy with the show and bringing him along to it.”

“[The combination of the dancers, orchestra and backdrop] was pretty cool. There were moments where they look like they’re jumping in the [backdrop] screen, an interactive screen. People were constantly coming from the screen on the stage, and then jumping back to the screen, and that was really well-choreographed and done very well.”

“The dancing was lovely.”

“The piece that they called ‘Journey to the West,’ I had grown up with. … I knew that story, so that was fun to see. The new stories were fun, but it was really fun to see one that I knew. I liked that.”

“It seems like everything [in the performance] has a good heart, especially [the] piece that has a commentary on oppression of freedom. … It has a lot of heart to it.”

“We had fun tonight, especially because we were out with the family, and it was my son’s first time in theater. There was a good amount of humor that a four-year-old could enjoy, and so we had a really good time.”