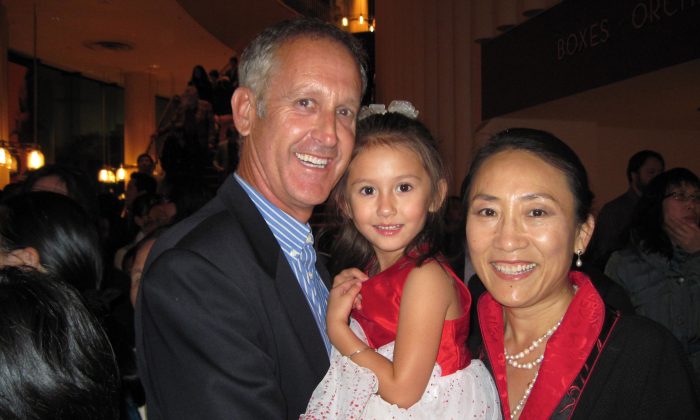 Audience members were treated to a unique orchestra that combines ancient Chinese instruments with a classical Western symphony orchestra.

“Wonderful! Even our 5-year-old loved it,” Matt Flenniken said after the concert.

Mr. Flenniken, a class A PGA golf professional and director of instruction at the Los Lagos Golf Course in San Jose, attended with his wife, Ping, and 5-year-old daughter.

“I loved it quite a bit,” He said. “But my wife plays violin, so I’m cursed with good taste.”

Mrs. Flenniken, who is of Chinese ethnicity, said she immensely enjoyed the pieces by the Shen Yun composers, who draw upon China’s millenia-old history and culture to create their work.

“I don’t know how to describe it; it’s so beautiful,” she said.

Mr. Flenniken praised the blending of the two musical traditions of East and West in the orchestra, adding that he had also seen other orchestras blending the two types of instruments. However, his wife added that other orchestras have “never been this good.”

Mr. Flenniken said he also enjoyed the fact that there were four conductors in the concert taking turns leading the orchestra.

“I liked the rotation, and all of them had their own personalities, which showed up both with themselves and the way they conducted. Quite nice, unique as well,” he said.

Mrs. Flenniken said they will definitely recommend the show to their friends. “I think many other people, they don’t know [about] this. If they know, they will come.”