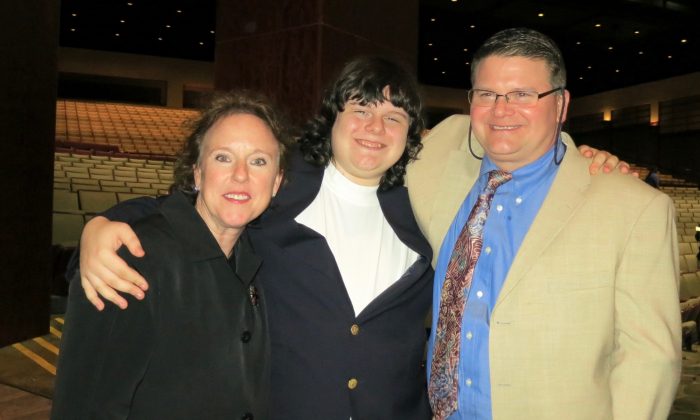 In sharing their impressions of the classical Chinese dance and music company after the performance on Jan. 26, mother, son, and father jumped back and forth in the conversation as one enthusiastically added to what another had said.

Shen Yun Performing Arts brings traditional Chinese culture—vignettes from its 5,000 year history—to the stage through dance and music. While the dancers move gracefully in union across dramatic and colorful backdrops, a full orchestra, comprised of both ancient Chinese and Western instruments, brings grandeur to a uniquely Chinese sound.

The family sat close enough to the stage so that they could see the musicians playing in the pit. Mr. Patrick Snowman, a physician, had performed music during his college years, playing both the french horn and trumpet. This evening he divided his time watching the dancers and the musicians, and particularly noted the fine trumpet players.

“One of them in particular, I could see him just doing these incredible things effortlessly. And it was so cool to see,” he said.

In marrying the Eastern and Western instruments into one standing orchestra, Shen Yun has accomplished a difficult feat. The Chinese pentatonic scale must be seamlessly matched with the Western octave. Shen Yun makes this union work by having the Chinese instruments carry the melody while the Western orchestra acts as a foundation.

Mrs. Lisa Snowman had her heart set on hearing the erhu even before she came. She’d read about the Chinese two-stringed violin-like instrument in the company’s brochure.

Having a history of over 4,000 years, the erhu lends itself to conveying deep emotions, and also to imitating sounds, “from chirping birds to neighing horses,” the company’s website says.

“The two-string instrument that makes the sound almost of a woman’s voice,” Mrs. Snowman said, and sang a bit to demonstrate.

“I could not wait to hear that. That two-string instrument, it was just beautiful,” she said.

Young Jacob was enthralled by the stories he saw onstage.

As one of the most expressive dance systems in the world, classical Chinese dance brings traditional Chinese culture—its customs, beliefs, and even spirituality—to the stage by telling stories.

“My favorite dance was the one about the Monkey King, because I knew the story,” Jacob said.

In the dance “Monkey King and Dragon Palace,” a vignette from the classic novel “Journey to the West,” the Monkey King has many magical powers. But as a hero, he needs a weapon, and the story is about his search for just the right one.

Jacob knew enough about the story to lean over to his parents before the crucial moment and tell them exactly what the weapon would be.

While the story of the Monkey King often leaves audience laughing, other moments of the performance carry deeper meanings, as Mr. Snowman noted. “I would also say this: the soprano and the tenor really brought me tears, both of them, because it was just moving to hear them sing,” he said.

Lyrics of the songs are projected behind the singers and audience members are often moved by their spiritual messages, reminding people that there is more to life than the material world.

In sum, Mr. Snowman said that seeing the culture and cultural traditions of China “was very very … ”